A one atom-thick layer of silicon - a material dubbed silicene - has been created for perhaps the first time. If fully tamed, this material might match graphene’s useful electrical properties. It could also be much easier to integrate with normal silicon-based circuits, meaning the development of super-miniaturised electronic devices could be accelerated. 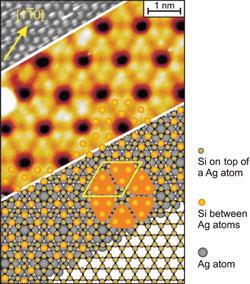 Silicene could be easier to integrate into silicon circuitry

Over the last decade, research groups from around the world have produced a spate of papers, each claiming to have prepared silicene. But according to Patrick Vogt of Berlin’s Technical University, Germany, and Paola De Padova from the Istituto di Struttura della Materia in Italy who led the latest effort to synthesise the material, these groups provided scant evidence that the material existed at all.

Vogt says that the problem with the previous reports of silicene was that they only provide scanning tunnelling microscopy (STM) images as evidence of the material’s existence. ’It’s difficult to conclude anything from STM images alone,’ he says. De Padova says the previous claims are ’highly dubious’.  Vogt and De Padova tried - and failed - to replicate work described in one of the rival papers.1 That paper reported silicon-silicon atomic distances that are ’almost impossibly short’, Vogt says.

The new work used simple vapour deposition techniques to grow a one atom-thick silicon layer on a silver crystal surface.2 ’We’ve looked at the chemical structure, the electronics and dimensions of the material we produced, and if you combine all these observations you can really be sure you’re looking at silicene,’ Vogt says. The structural parameters observed, like bond angles and lengths, matched density functional theory calculations excellently.

Vogt says it is difficult to predict how ’good’ silicene might be in electronics compared with graphene. ’We’re very much at the beginning of looking at this material,’ he says, ’and there are other options too. It might be worth looking at germanium, which would give germanicene.’

Andrei Khlobystov, an associate professor of inorganic chemistry at the University of Nottingham,UK, says ’people are struggling to integrate graphene into electronic devices’ and agreed there was ’promise’ that silicene might circumvent that problem. ’If you look at the detail of the experimental and theoretical calculations, [silicene] is not flat - it’s corrugated,’ he adds. ’For that reason, you’d expect quite different electronic and structural properties from graphene. But surprisingly, to me, this paper reckons that the properties would be very similar, in terms of the conductivity, the absence of a band gap and the mobility of the charge carriers.’ Khlobystov says the next important step would be to measure the properties of the material without the metal support.