US-based researchers have delved deeper into the possibility of artificially redistributing surface acidity in our oceans by making use of sedimentary carbonates naturally found on the ocean floor. Their proposal could help limit global temperature rises by amplifying the ocean’s ability to remove CO2 from the atmosphere.

Terrestrial weathering of silicate-containing rocks helps regulate atmospheric CO2 levels by yielding HCO3⁻ ions that end up deep in our oceans and can be used to replenish CaCO3 deposits. However, this process takes around 100,000 years. Despite recent studies exploring how to accelerate the overall process, Michael Tyka from Google explains that ‘adding finely crushed terrestrial minerals has the potential to alter the ocean, if done at large scale. For example, terrestrial rocks often contain iron, which could lead to huge algal blooms due to a fertilisation effect.’ 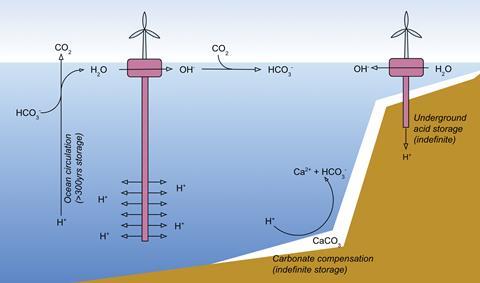 The dissolution of ocean carbonate deposits also aids carbon capture by producing HCO3⁻ ions that react with atmospheric CO2 at the ocean’s surface, but this process is similarly unable to keep up with human CO2 emissions. Now, Tyka and his team have proposed a way to redistribute surface acidity to deeper ocean layers, which negates the need for additional materials and speeds up neutralisation because the acidity encounters the alkaline deposits sooner.

The process requires only seawater and energy, which could be in the form of an open-ocean power source that runs on wave, wind or ocean thermal energy. This energy could be used to electrochemically split seawater into acid and base, with the former being pumped into the deep ocean and the latter enabling pH stabilisation at the surface to maintain an increased flux of CO2 from the atmosphere. Releasing the acid in the deep ocean would see it induce the dissolution of carbonate sediments, producing HCO3⁻  ions, which would eventually circulate to the ocean’s surface and promote CO2 uptake from the atmosphere.

Simulations predict that up to 3 gigatonnes of carbon could be removed annually over 50 years, with the surface water becoming more alkaline and the pH of deep water increasing by no more than 0.2. ‘While the deep ocean becomes more acidic in their model, the surface ocean pH increases, which may be good news for surface dwelling organisms and ecosystems sensitive to ocean acidification,’ comments Phil Renforth, an engineer and geochemist at Heriot-Watt University in the UK.

Tyka’s team estimates a minimum cost per tonne of CO2 captured of $93–297 (£67–218), which is much lower than predicted costs for other CO2 removal strategies, including CO2 extraction ($373–604), direct air capture ($89–506) and terrestrial weathering ($24–578). Whilst Tyka says this method could be quite competitive with regards to cost, ‘the scale of deployment examined in the study is so many orders of magnitude larger than what these technologies are used for today… time will tell which ones can get cheaper with scale.’

‘Concepts such as these challenge us to consider our relationship with the ocean,’ says Renforth. ‘While our focus over the coming decades should be responsible environmental stewardship of the ocean, it is important to consider if the oceans resources can be harnessed to prevent climate change.’