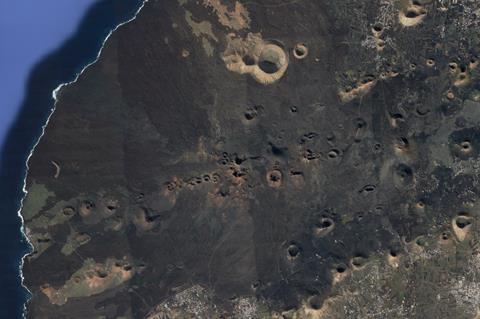 Cinder cone volcanoes in Lanzarote in the Canary Islands. There are plentiful supplies of volcanic ash all around the world that could be used to fertilise the oceans to produce phytoplankton blooms to sequester carbon dioxide

Dumping volcanic ash into the ocean could boost the rate at which carbon is drawn out of the atmosphere and sequestered in marine sediments, researchers from the UK and Germany have proposed. The process, they say, would be simple to implement, requires no changes to land usage – unlike, say, reforestation programmes – and is significantly cheaper than other geoengineering approaches.

For microscopic marine algae, the deposition of erupted volcanic material, or tephra, can be a nutrient-rich boon. Blooms of phytoplankton, for example, occurred after the 2008 eruption off the Aleutian island of Kasatochi and the explosion of the Pacific Island of Anatahan in 2003.

According to geochemist Jack Longman of the University of Oldenburg, Germany and colleagues, these events increased the rate at which carbon dioxide was taken up by algae to help create their calcium carbonate exoskeletons – many of which ultimately sink to the seafloor and are buried. Tephra, they said, can also become physically associated with plankton debris, increasing sinking rates. It also inhibits the oxidisation of carbon back to carbon dioxide at the seafloor by absorbing dissolved oxygen from water in pores in the sediments, and locking carbon up as carbonates, as well as iron-, aluminium- and manganese-based colloids. 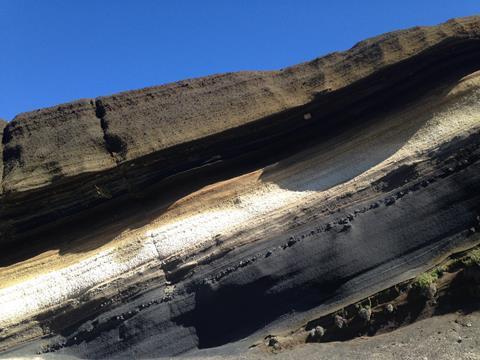 Tephra is a cheap and abundant resource around the world

Using the coast of Peru as a case study, the team calculate that depositing 50,000 tonnes of tephra – a bulk carrier vessel’s worth – offshore could sequester 2750 tonnes of atmospheric carbon dioxide. This, they said, equates to a cost of around £43 per tonne of carbon dioxide sequestered – ‘an order of magnitude cheaper than many proposed greenhouse gas removal technologies’. The process could work anywhere where plankton grow in abundance but have low natural burial rates, as tephra deposits are available almost globally.

‘Tephra is cheap, not limiting, and all the required tech already exists. Bentonites – altered tephra – are already regularly mined, so we don’t need to develop new approaches,’ Longman says, adding that tephra would only require sieving in preparation for use. This, he added, ‘is unlike other ocean fertilisation approaches, which use processed iron oxide liquids.’

Two issues remain: the concern that tephra could harm marine ecosystems – an area which Longman concedes needs investigation – and the fact that marine dumping in general is banned under the 1972 London Convention on marine pollution.

‘I like the idea of mimicking natural processes to supplement or enhance their carbon drawdown capacity, and volcanic ash addition certainly sounds close to what is occurring in the real ocean,’ says Jonathan Lauderdale, an ocean biogeochemist from the Massachusetts Institute of Technology, US, who was not involved in the present study. While tephra dumping could be a ‘useful tool’ alongside other geoengineering tools, he adds, ocean-based greenhouse gas removal proposals still come with many unknowns.

‘It is really difficult to predict the response of the complex biological pump, as well as downstream ecological consequences that influence the long-term fate of organic carbon in the ocean, which has vexed some trials of ocean iron fertilisation in the past,’ Lauderdale cautions.