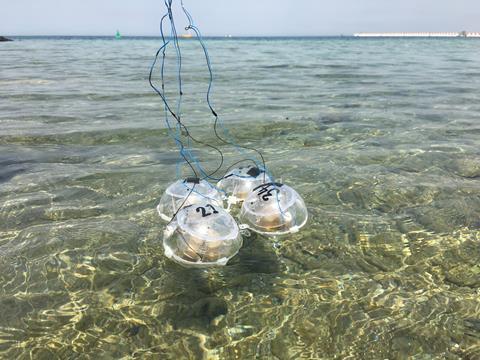 The team performed field tests in the Red sea

Scientists have achieved a first in harvesting energy from water waves to make a carbon-based liquid fuel. By generating static electricity from the undulating motion, they are able to convert carbon dioxide into the hydrogen-carrier formic acid.

The prototype system comes from an interdisciplinary effort by researchers in Saudi Arabia, the US, China and Hong Kong. ‘We realised that we needed different types of expertise to contribute to this project. Expertise in nanogenerators, in electrocatalysis, and also in electronic circuits,’ says team member Siu-Fung Leung, from the King Abdullah University of Science and Technology in Saudi Arabia.

The method uses triboelectric nanogenerators – floating spheres that contain a concertina-like structure. As the spheres bob on ocean waves, the concertina folds rub together, generating static electricity as does rubbing a balloon on clothing. In principle, this electrical energy can drive an electrochemical cell in converting carbon dioxide to formic acid, but the voltage produced by the triboelectric nanogenerators is far too erratic for this purpose. To solve this, the team introduced an intermediary component: a supercapacitor and a system of rectifiers so they were able to accumulate the generated charge and release it to the cell in a smooth and controlled way.

The system consists of three components: the spring-assisted spherical triboelectric nanogenerator; an energy storage circuit with rectifiers and a supercapacitor; and a two-electrode electrochemical cell for the carbon dioxide reduction and oxygen evolution reactions

‘They are the first to think about how you would integrate the two of these technologies together,’ says Katherine Holt, an electrochemistry expert at University College London, UK. ‘It’s going from fundamental lab-based research to demonstrating on a small scale that this is feasible.’

Holt notes the potential benefits in turning an intermittent renewable energy source into a stored chemical form. But she also highlights a missing ingredient: ‘Where’s the carbon dioxide coming from? If I just leave a solution open to the air, some carbon dioxide will dissolve in, but the concentration will be quite low.’

Leung agrees that low carbon dioxide concentration is a hurdle. ‘The entire field is facing this challenge. A lot of people in the field of carbon dioxide reduction are working on it,’ he says. One solution is to source concentrated carbon dioxide from the output of an industrial process – a factory or power plant – though how to feed this to an ocean-borne array of generators is an open question.