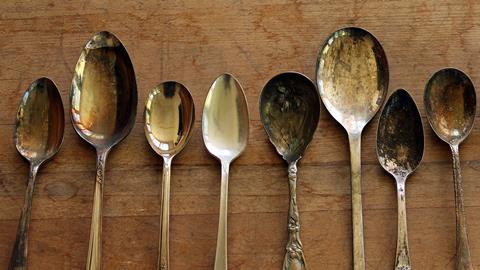 The long standing mystery of why silver tarnishes much more quickly when exposed to sulfur, rather than oxygen, has been solved using molecular dynamics simulations. The work could be useful for producing corrosion-resistant silver to prevent circuit board failure, as well as help conservators of silver jewellery and historical artefacts.

‘Plenty of information was already available about the macroscopic effect of tarnishing,’ says Gabriele Saleh who conducted the study with Stefano Sanvito at Trinity College Dublin, in collaboration with Nokia Bell Labs in the US. ‘Now we have completed the picture by showing how tarnishing acts at the atomic level.’

Sulfur-containing compounds, particularly hydrogen sulfide (H2S), had long been known as the main chemical culprits behind silver tarnishing. Even at parts-per-billion sulfur can cause silver tarnishing in the form of a thin dark layer of silver sulfide. However, thermodynamics predicts that oxygen should react just as well with silver to form silver oxide. Yet it doesn’t. The question, then, was why?

To find the answer the team turned to molecular dynamics simulations. However, even with the most powerful supercomputers currently available, simulating full reactions at the quantum mechanical level would take many years.

To get around this, the team exploited a technique called ReaxFF (reactive force fields). This enables a computer to be ‘trained’ to reproduce quantum chemical results and quickly tease out the different mechanisms behind silver–oxygen and silver–sulfur reactions at the atomic level.

The simulations revealed that silver sulfide forms much faster than silver oxide because when S8 molecules approach silver, they rapidly dissociate into individual atoms and react with silver. Conversely, O2 dissociates more slowly and has less ‘sticking’ power due to a higher kinetic barrier.

What’s more, the growth of either an oxide or sulfide would normally be expected to slow down after the first tarnish layer forms due to oxygen or sulfur atoms having to diffuse through it to react with silver atoms below. While this remains the case for oxygen, the researchers discovered that silver atoms appear to diffuse upwards towards sulfur, allowing silver sulfide to grow much faster.

‘Observing a mechanism in which metal (silver) ions are “sucked up” by sulfur and pushed towards the surface was utterly surprising,’ says Saleh. ‘Silver could now be doped by elements that slow down its diffusion, thereby hampering its ability to move through the sulfide and greatly slow down the corrosion process.’

’The presented scientific findings on the exact reaction mechanism between silver and H2S and O2 will help to find preventive measures to protect silver artefacts and objects,’ comments Rita Wiesinger, who studies silver tarnishing at the Academy of Fine Arts in Austria. ‘Beyond that it is of course important in other fields of science such as electronics, where these findings might prevent material failure in the future.’

‘Silver corrosion-related failures are not uncommon in electronics and represent an economic burden, as well as a safety and reliability issue,’ explains Saleh. ‘Nokia Bell Labs are interested in producing printed circuit board finishes that can function for many years in corrosive environments. Now the time is ripe for carrying out materials design strategy towards corrosion-resistant, silver-based materials.’

Update: One of Gabriele Saleh’s quotes was changed at his request on 29 March 2019