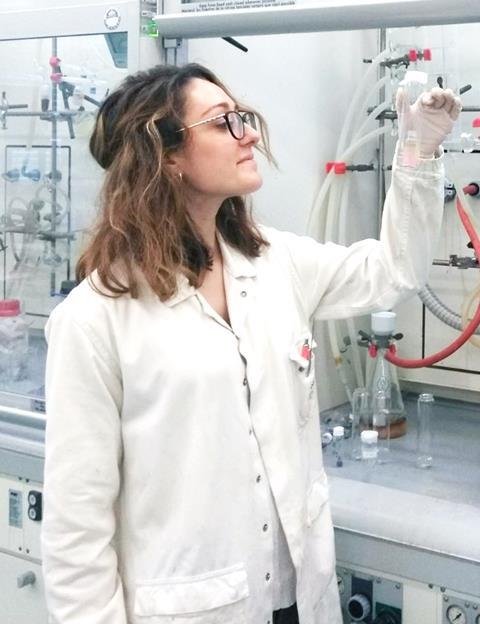 An iron complex has become the first single-molecule magnetic memory that works at room temperature. ‘It’s a paradigm shift that will significantly impact the field,’ says Roberta Sessoli from the University of Florence, Italy, a pioneer in molecular magnetism who wasn’t involved in the project. The discovery could lead to miniaturised memory devices, which would reduce the energy consumption of everyday electronics.

Sometimes molecules possess a memory effect known as bistability, where they can switch between two configurations in response to an external stimulus. Single-molecule magnets, for example, showcase magnetic bistability when exposed to external magnetic fields. However, this effect only holds at very low temperatures – a dysprosium compound currently holds the stability record at 80K.

Spin-crossover complexes present an alternative approach. ‘In spin crossover, the system changes its electronic configuration, even the geometrical arrangements of atoms,’ explains Sessoli. ‘This modifies the number of unpaired electrons, thus the magnetic properties.’ Such structural shifts mean spin-crossover systems only show bistability in bulk – never as isolated species. Until now.

‘Spin-crossover complexes need the cooperative effect,’ explains Christoph Busche from the University of Strathclyde in Glasgow, UK. ‘Usually, you need a lot [of molecules] to detect it,’ he adds. ‘In the paper, researchers did strong dilutions in liquid and solid forms, and the memory effect is always there!’

Busche explains that solid dilutions – where zinc replaces iron atoms – are standard practice in the field of molecular magnetism. Despite supplanting 95% of the iron, bistability persists. ‘It’s pretty exciting this effect is observed in single molecules,’ says Busche. 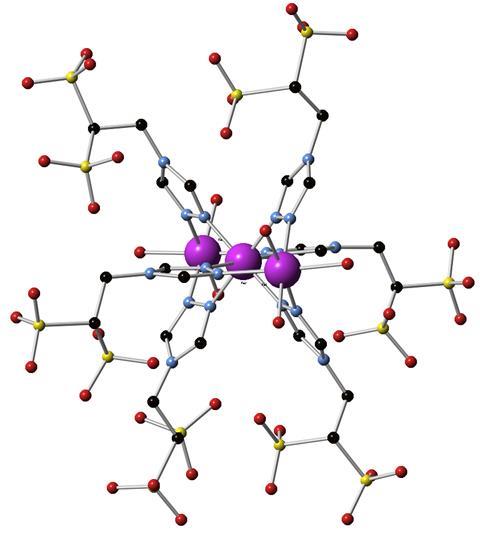 Structure of the iron triazole complex

According to Galán-Mascarós, the secret is the molecular structure of the anionic iron–triazole complex. ‘Originally, we pursued anionic spin-crossover compounds because they were scarce,’ he explains. ‘Moreover, they open the possibility of cool combinations with cations to create convenient hybrid materials.’

Additionally, this unique anionic structure serves another purpose: when heated up, the atoms rearrange and the negatively charged functional groups separate in space. ‘This effect ensures the magnetic memory “locks” at high temperatures, as bringing back together the charges creates repulsive responses,’ adds Galán-Mascarós.

‘Indeed, this ligand makes this complex special,’ says Sessoli. ‘The many anionic branches build a network of intramolecular hydrogen bonds that induce bistability,’ she adds.

However, the temperature switch is probably the main weakness of the new magnetic memory. ‘It’s not very handy,’ says Sessoli. Currently, researchers need a gradual temperature transition to “record” information – the slower, the better for bistability. ‘Fast writing remains an issue for this type of materials,’ she adds. Nevertheless, future investigations could uncover quicker activation methods, including pressure, light or electricity. ‘Maybe even laser pulses,’ dreams Galán-Mascarós.

Reading information is straightforward, though. Besides the magnetic memory change, the iron complex changes colour from white to purple after the spin transition. ‘This provides a very easy way of detecting the different states, on top of measuring the magnetic moments,’ explains Busche. 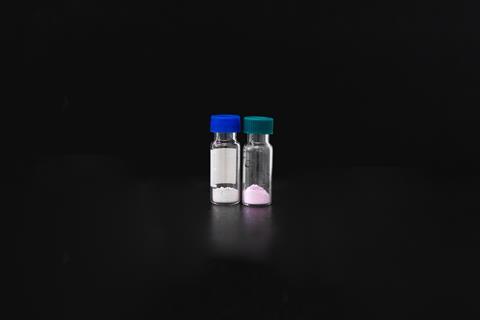 To ensure the memory effect appeared on the scale of a single molecule, the team of researchers performed exhaustive experiments including NMR, dynamic light scattering, magnetic susceptibility, UV–visible spectroscopy and DFT computational simulations. ‘Extraordinary claims require extraordinary evidences,’ Galán-Mascarós said . ‘We delivered these thanks to a unique and diverse interdisciplinary team, including leading experts in spin crossover.’