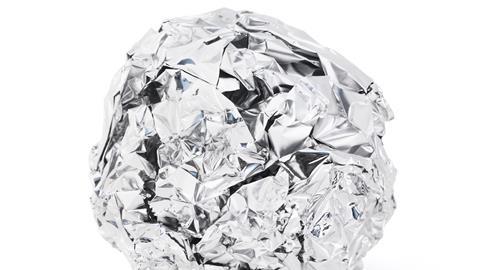 Dirty aluminium foil has been recycled into an alumina catalyst that is more active and cheaper than its commercial counterpart. The approach could reduce the amount of aluminium foil going to landfill while sidestepping the environmental damage associated with mining bauxite – the ore which aluminium is extracted from.

It’s generally easy to recycle aluminium if it’s clean. But aluminium foil is usually contaminated by grease and oils from food or, in a lab setting, adhesives and tapes. Since contaminants can damage recycling equipment and create an inferior end product, countless tonnes of waste foil is landfilled or incinerated every year.

It was a problem that Ahmed Osman, a researcher at Queen’s University Belfast, sought to remedy after spotting aluminium foil waste at his institute. Previously, he developed a way to convert aluminium waste into alumina catalysts for producing the biofuel dimethyl ether (DME). Now, Osman and colleagues have come up with a crystallisation method to obtain pure aluminium salts from contaminated waste foil. 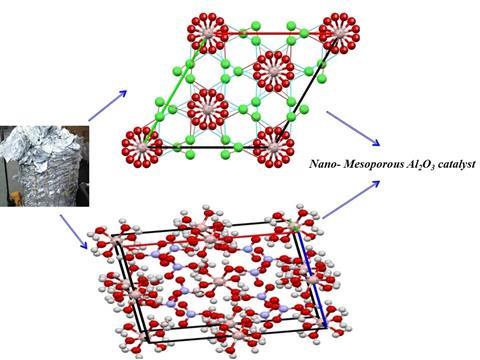 ‘I was astonished by the produced ultrapure single crystals from the aluminium foil waste. I didn’t expect it to be 100% pure,’ says Osman. Using the crystals, the team prepared γ-aluminium oxide, a transitional alumina which is a commercial acid catalyst used in the production of DME. Owing to the crystals’ purity the researchers had precise control over the alumina’s structure, which produced a superior catalyst.

‘It is well known in catalysis that the percentage of chloride in the catalyst structure can lead to catalyst poisoning,’ explains Osman. ‘We managed to control this chloride content and our homemade catalyst had half the chlorine content relative to the commercial catalyst.’ The new catalyst also had a higher surface area and larger pore volume than the commercial version, characteristics that ultimately produced a higher catalytic activity.

‘The use of non-precious metals in catalysis is a very important area of research needed to advance sustainability in chemical processing. This work develops the chemistry of a particularly important element, aluminium, which is produced on large scales,’ comments Louise Berben, who investigates aluminium chemistry at the University of California, Davis, US. ‘Efficient recycling of aluminium would contribute greatly to reduction of waste in the mining and chemical industries.’

There could be cost benefits too. Osman says making the foil-derived catalyst cost about £120/kg while the commercial alumina catalyst comes in at around £305/kg. ‘The market we would open up in the application of alumina catalysts derived from foil feedstock is phenomenal,’ he adds.