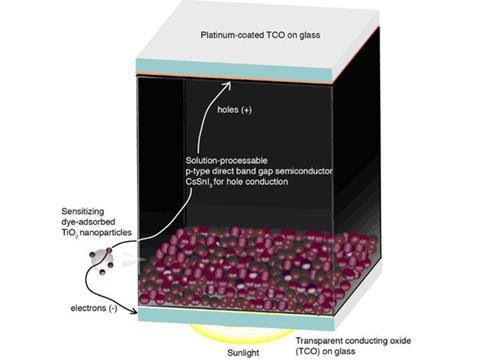 A new breed of dye-sensitised solar cell (DSSC) has been created in which the traditional liquid electrolyte is replaced with an electron-hole conducting inorganic material. The new cell is just as efficient as regular DSSCs and promises to be much more robust and easy to make. It could lead to a new generation of easily fabricated photovoltaics.

Conventional DSSCs, also known as Grätzel cells after their inventor, use an I-/I3- redox couple dissolved in an organic solvent as an electrolyte to deliver charge to electrodes. However, the liquid is volatile, corrosive and reactive and so makes cells unstable and prone to leaking.

Scientists have long considered replacing the liquid electrolyte with a solid one to overcome these problems and several examples - employing polymers and inorganic crystals - have been created. All have proved to be quite inefficient, however, and the performance of many degrades over time.

Mercouri Kanatzidis, a professor of inorganic chemistry at Northwestern University in Chicago, US, used a completely new strategy for his cells. ‘We got rid of the redox couple and replaced it with a new material that takes the electron hole created by light excitation all the way to the electrode directly, without any redox chemistry going on,’ he says.

This material is an inexpensive p-type semiconductor: caesium tin iodide (CsSnI3), doped with fluorine. CsSnI3 dissolves readily in common solvents like acetonitrile and N,N-dimethylformamide (DMF). This means cells can be fabricated by solution transfer of CsSnI3 to a TiO2 substrate by syringe, followed by simple evaporation of the solvent. This method ensures crystals of CsSnI3 form an intimate contact with the porous TiO2 structure. A common DSSC dye, a ruthenium bipyridyl complex called N719, was used.

Kanatzidis says the manufacturing process is very simple. ‘Even with the efficiencies we have to hand, we think they can be commercialised. We’re working towards that with our partners,’ he says.

The cell reached efficiencies of 8.5% under standardised test conditions. This figure is not far from the efficiency of a conventional Grätzel cell, which usually has efficiencies of 10-12%. But Kanatzidis’ cell could absorb a wider range of wavelengths - notably in the near infrared region - and as scope for further chemical development.

‘This is a promising new direction for solar cell research,’ says Neil Robertson, who works on DSSCs at the University of Edinburgh, UK. ‘I’ll be interested to see in due course if these materials can also provide the hoped-for stability, which would be the main practical advantage that this approach promises.’