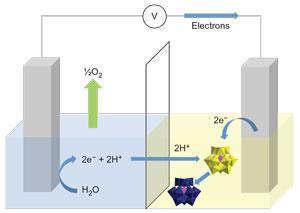 The polyoxometalate acts as a sink, storing the protons and electrons released when water is split

UK scientists say that they have developed the first widely-useable electrolysis system that splits water and releases hydrogen and oxygen in separate stages. Lee Cronin and Mark Symes from the University of Glasgow used a phosphomolybdate anion buffer to store protons and electrons generated when oxidising water to oxygen. Instead of directly producing hydrogen, as electrolysis normally does, the buffer lets the scientists choose where and when they do the second step. That could aid efforts to store renewable energy as hydrogen fuel made by water electrolysis.

‘Simultaneous hydrogen and oxygen production is a kind of “elephant in the room” for water splitting,’ Cronin tells Chemistry World. The gases can pass through and degrade expensive Nafion polymer membranes meant to separate them in existing electrolysers, with potentially explosive consequences. ‘We knew that natural photosynthetic systems separated oxygen and hydrogen-equivalent production in time,’ Cronin says. ‘So we thought, “Can we do this, but electrochemically?”’ 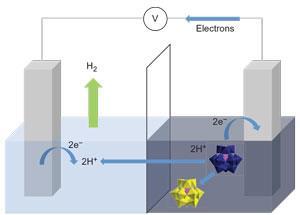 Though electrolysis usually produces oxygen and hydrogen together, two interlinked half-reactions actually generate the gases. The first oxidises water into oxygen, protons and electrons. In the second, electrons reduce the protons to give hydrogen. To separate the reactions, Cronin and Symes sought chemicals that could be reduced and protonated, but could later release those electrons and protons again. They reasoned that the necessary electron-coupled-proton buffer (ECPB) properties might lie within the transition metal and oxygen-containing networks of polyoxometalate anions.

‘Doing tests where you oxidise water, but make absolutely no hydrogen would seem like failure to most people,’ Cronin says. ‘But this was exactly what we were after, as when you reverse the process you get pure hydrogen and no oxygen.’ Of the polyoxometalates they tried, phosphomolybdate anions, [H2PMo12O40]-, worked best. ‘In one instance, we stored our reduced and protonated ECPB for eight months before we re-oxidised it to liberate hydrogen,’ Cronin notes. But splitting the reaction into two steps imposes an energy penalty, making it 87% as efficient as the one step reaction, at best.

Separating water splitting could mean simpler and cheaper electrolysers. A membrane is still needed so protons can move between compartments, but keep the ECPB in place. But the phosphomolybdate anion is so large that cheaper dialysis membranes can be substituted for costly Nafion. Water splitting in such proton-electrolyte membrane electrolysers usually needs a three-electrode system, with two platinum electrodes. Separate gas evolution can be simpler. ‘You can use just one precious metal electrode in the cell instead of two, as it can be used alternately to produce oxygen and hydrogen,’ Cronin says. However, this reduced efficiency to 79%, compared with the single-step process.

These benefits could help to produce hydrogen to store energy from renewable sources like solar and wind, whose output can vary dramatically. Xile Hu, who researches electrocatalytic water splitting at the Swiss Federal Institute of Technology in Lausanne, underlines this method’s versatility in that context. ‘The spatial and temporal separation of hydrogen and oxygen production, achieved via this original approach, opens up new avenues in chemical energy storage,’ he says. ‘One can imagine electrolysers and photoelectrolysers that are more flexible, employ cheaper membranes, or produce hydrogen on-demand.’

Cronin’s team is now investigating non-polyoxometalate ECPBs that work under different conditions. The scientists also aim to send reduced, protonated ECPB to researchers in Australia, who will do the hydrogen-evolving step. But perhaps most importantly, they are working towards a small-scale prototype electrolyser using this technology. ‘We’re hoping that this will show significant cost advantages over traditional electrolysers, which will help to bring green hydrogen production from water a step closer to reality,’ Cronin says.