An early morning toxic gas leak from a chemical factory outside Vishakhapatnam city in the eastern Indian state of Andhra Pradesh killed 12 people and hospitalised some 800 on 7 May. Nearly 1200 others had to be evacuated from nearby villages. 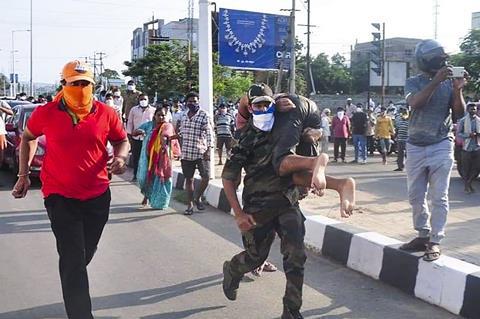 The leak happened in the early hours, when many locals were asleep with windows and doors open for cooling. After waking, villagers scrambled to escape the toxic vapour

The factory, owned by LG Polymers ­– an Indian subsidiary of South Korean petrochemical giant LG Chem, manufactures polystyrene and co-polymer products. It was re-opening after coronavirus lockdown. Maintenance issues and ill-trained staff apparently led to a valve leak as refrigeration failed on a storage tank. Styrene vapour escaped into the atmosphere from around 2.30am onwards, affecting a roughly 3km radius. The full details are subject to an ongoing investigation. Styrene is stored below 17°C to inhibit self-polymerisation, which is exothermic and can lead to runaway reactions and heat the liquid above its boiling point of 145°C.

With home windows and doors open for cooling, people living nearby inhaled the fumes while asleep and suffered breathing difficulties and eye irritation. Many woke up and tried to run from the affected area. Disturbing video and images shared by news and social media showed people lying on the roadsides or collapsing unconscious on pavements. There was no siren to alert locals of the gas leak.

Questions have been raised as to why the factory was being allowed to reopen, when plastic production is not an essential service. There have also been complaints that the factory does not have the requisite environmental clearances, as the company admitted in an affidavit in 2019.

In a statement of apology, LG Chem said that the gas leak is now under control. ‘We are investigating the exact cause of the incident and scope of damage with the authorities, and will announce the findings as we have more concrete information,’ it said.

Acting in the public interest, on 8 May the National Green Tribunal independently imposed an interim fine of ₹500 million (£5.4 million) on the Korean company. The court has formed a five member committee under former Andhra High Court judge Seshayana Reddy to investigate the cause of accident and determine responsibility and liabilities. Its report, due on 18 May, will also cover the extent of damage to life, public health and the environment.

The chief minister of Andhra state has promised goodwill payments of ₹10 million to the families of each of the deceased, plus ₹1 million to those on ventilator support and a range of payments to compensate local people, including those undergoing treatment and who have lost livestock to the gas.

‘The Andhra government has announced this compensation because it too is culpable for various regulatory lapses and has looked the other way,’ says activist N D Jayaprakash of Delhi Science Forum who has been closely associated with ongoing litigation over the 1984 Bhopal methyl isocyanate tragedy. ‘Between pious announcements and actual payments, India has had a terrible track record, as the Bhopal tragedy shows amply’, he says.