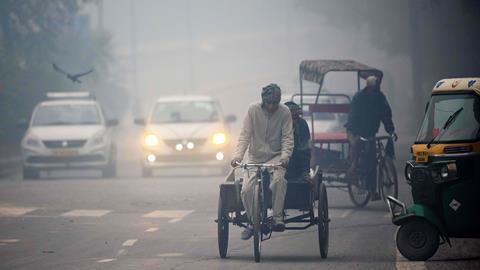 A new study suggests that high levels of chloride from industry and burning plastic waste could be responsible for enhanced haze and fog formation in Delhi and Chennai,1 leading to around half the reduced visibility in India’s capital city and having serious implications for health and the economy. The results could help researchers understand why some polluted regions are more prone to smog and cloud than others.

Many cities in India are affected by pollution, with air quality being particularly bad in winter. Particulate matter – a mixture of suspended solid and liquid particles – is a key atmospheric contaminant that affects millions of people across the country. ‘The low visibility associated with haze and fog can cause air traffic delays and increase motor vehicle accidents,’ notes Pengfei Liu, an atmospheric chemist at the Georgia Institute of Technology in the US, who led the study together with Sachin Gunthe of the Indian Institute of Technology Madras. ‘The severe air pollution also causes increases in cardiovascular, respiratory and neurological diseases,’ he adds. ‘We can’t tackle this air pollution problem unless we understand the chemical mechanism behind it.’

It is unclear why Delhi is more affected by haze and fog than other polluted Asian cities, although a large fraction of its particulate matter is primary organic matter. Now, the international team may have found the answer. ‘We determined the chemical composition of atmospheric fine particles in Indian cities and observed unexpectedly high concentrations of chloride,’ Liu says.

The team monitored the mass and chemical composition of particulate matter smaller than 1µm in Delhi and Chennai in real time and then performed thermodynamic modelling to uncover the role of chloride in haze and fog formation.

‘They demonstrated that particulate matter grows very fast due to co-condensation of HCl, ammonia and water,’ explains Manabu Shiraiwa, a researcher at the University of California, Irvine, in the US, who was not involved in the study. He points out that India has a unique environment, characterised by high ammonia release from agriculture and significant chlorine emissions due to burning waste.

Winter mornings in Delhi are usually cold and humid, offering the ideal conditions for the process to take place. ‘Gas-phase HCl emitted from plastic-containing waste burning and industrial processes can dissolve in aerosol water,’ explains Liu. Ammonia can then react with HCl to form ammonium chloride, stabilising chloride in the particle phase, he adds. ‘This particle-phase chloride can absorb even more water from air, leading to a quick growth of the aerosol particles into haze and fog droplets. We estimate that this mechanism can contribute more than 50% of the visibility deterioration in Delhi.’

Yafang Cheng from the Max-Planck Institute for Chemistry in Germany believes that the discovery will help to develop more locally tailored strategies. ‘The identified high chloride concentration is a special characteristic of air pollution in India, different from other megacities such as Beijing,’ she says. ‘This finding has very important implications for air-pollution management in India. Besides learning from examples in other places of the world, India may now develop its own, more precise and cost-effective solution against its severe haze pollution, for example, targeting the control of chlorine emissions.’