Switching molecular self-assembly on and off with electricity

A simple strategy to trigger and control molecular recognition has been developed by scientists in the US, China and Australia. The new method, which uses electrons as a catalyst, could find important applications in medicine and materials science.

Molecular recognition and self-assembly play a crucial role in determining many of the properties of biological systems, so chemists have long been interested in expanding these processes to synthetic molecules. But that’s not an easy task and until now speeding up molecular recognition has only been possible using a sophisticated catalyst design. 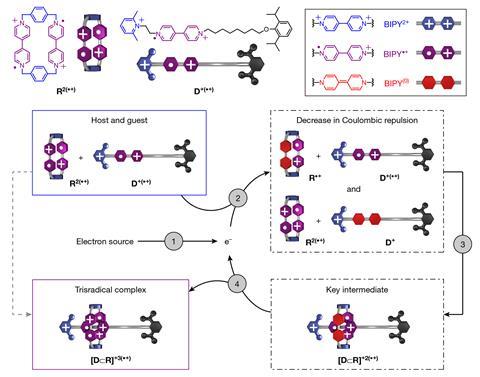 Design of an electron-catalysed molecular recognition process. The use of an electron catalyst sped up the assembly of the rotaxane by up to 640 times

‘To the best of our knowledge, this is the first time that electrons are used as a catalyst to promote a molecular recognition process,’ says Yunyan Qiu from Northwestern University who was part of the research team. ‘Of course, other catalysts can be used too, but the electron has benefits because it’s probably the simplest catalyst in the chemistry world.’

Qiu’s colleague Yang Jiao notes that besides its simplicity, the new approach has several other advantages. ‘We only need little amounts of electrons to significantly accelerate molecular recognition and can use electricity to control the course of the reaction,’ he says. By switching the electric current off and on, the researchers can interrupt and restart the process at will. ‘We can stop at any moment and are able to control the rate and yield quite precisely,’ points out Jiao.

Using this method, the scientists were able to boost the formation of a complex between a macrocyclic host and a dumbbell-shaped guest, making the process run up to 640 times faster. ‘The use of electrons as catalysts has been demonstrated in the molecular world,’ notes chemistry Nobel laureate Fraser Stoddart who co-led the study. ‘What these young researchers have done here is to take this approach beyond the molecule.’

The team mixed solutions of the host and guest molecules under an inert atmosphere and then added a chemical reductant or ran electricity through the system using an electrochemical setup to introduce a catalytic amount of electrons. The whole process was monitored using UV–vis spectroscopy.

Qiu explains that as the host and guest molecules are both positively charged, they normally repel each other and don’t react. ‘After adding the electron, the overall positive charges in the host and guest are decreased, lowering the barrier for the complexation to happen,’ he says. ‘With a non-covalent interaction serving as the driving force – radical pairing in this case – the host and guest can form an intermediate supramolecular complex, which then turns into the most stable complex by releasing the electron back into the catalytic cycle to restart a new round of catalysis.’

‘This is a major step in the new field of non-covalent synthesis,’ comments Bert Meijer at Eindhoven University of Technology in the Netherlands. ‘A number of groups are working on this, but the fact that Stoddart and colleagues introduce a catalytic cycle to overcome a kinetic barrier is a step change in thinking.’ Meijer is convinced that the strategy will open up a completely new way to formulate products for different uses.

But the method only works for redox-active structures. ‘The substrates must accept electrons rapidly,’ mentions Jiao. ‘I don’t think this is a significant limitation because many molecules can do that.’ The next step is to expand the approach to other kinds of non-covalent systems. The team has already achieved this for a donor–acceptor pair and is now planning to look at hydrogen bonds and peptide interactions. Jiao says that the ultimate goal is to be able to control self-assembly at different length scales and try to create new forms of complex matter.