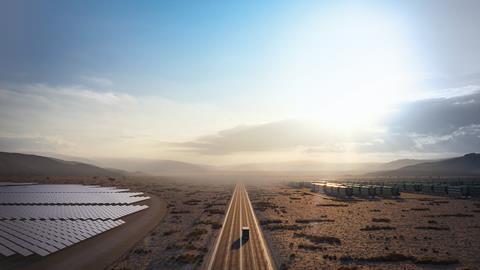 The world’s largest carbon capture and storage plant is expected to be operational by late next year, launched by the US climate tech companies CarbonCapture in California and Frontier Carbon Solutions. The companies anticipate that the new facility in Wyoming will be able to remove 5 million tonnes of atmospheric carbon dioxide annually by 2030.

Dubbed Project Bison, the facility will use modular direct capture systems for ease of scale up. These units will suck up carbon dioxide from the air using large filters, and the concentrated captured gas will then be permanently stored deep underground in saline aquifers.

The modular architecture of this direct air capture (DAC) technology allows for the possibility of developing extensive new renewable energy facilities, such as wind and solar, according to CarbonCapture and Frontier Carbon Solutions. Given the geologically scalable storage features of their site, they say Project Bison has ‘no practical limits’ to scaling to megaton levels and beyond.

‘We plan to have our first DAC modules fielded by the end of next year and to continue installing capacity as quickly as modules come off our production line,’ said Adrian Corless, CarbonCapture’s chief executive and chief technology officer. ‘Our goal is to leverage economies of scale to offer the lowest priced DAC-based carbon removal credits in the market.’

The current record for largest atmospheric carbon removal project is held by Swiss pioneer Climeworks, whose ‘Orca’ plant in Iceland captures 4000 tonnes of carbon dioxide each year. Orca permanently stores this gas by injecting it into water underground where it reacts with the basaltic rock below the plant in Iceland, to form a carbonate.

In June, Climeworks announced it was building an even bigger direct air capture and storage facility in Iceland named Mammoth, which is designed to suck up 36,000 tonnes of carbon dioxide annually when fully operational in a couple of years. The goal is for the facility to have a multi-megaton capacity by 2030, and deliver gigaton capacity by 2050.

Robert Watson, an environmental chemist and former chair of the Intergovernmental Panel on Climate Change, is encouraged to learn about project Bison. ‘There is no doubt we need to address the challenge of human-induced climate change through a portfolio of measures, including producing our energy from low-or zero-carbon sources … using our energy more efficiently, reducing deforestation, reducing the emissions of non-carbon dioxide gases and removing carbon dioxide from the atmosphere,’ he tells Chemistry World. ‘We cannot rely on any one approach, we need all of them.’

When it comes to the specifics of Project Bison, Watson says he would like to know the current cost of capturing and storing each tonne of carbon dioxide, and the projected cost when the facility is fully operational in 2030.

He assumes that CarbonCapture and Frontier Carbon Solutions have demonstrated the carbon dioxide will be permanently stored, and will not be released by any earth tremors, and emphasises the magnitude of the challenge. ‘They will need 10,000 modules to capture 5 million tonnes of carbon dioxide per year by 2030,’ Watson says. ‘Obviously they believe this is doable and economic.’

Current global emissions of carbon dioxide are about 50 billion tonnes annually, offsetting this would require 10,000 Project Bison-sized plants that each remove 5 million tonnes per year, he notes. ‘I applaud the project, but recognise it is not a magic bullet – but it will contribute in the fight against human-induced climate change if the project is scalable (need lots of storage sites) and the costs are reasonable.’