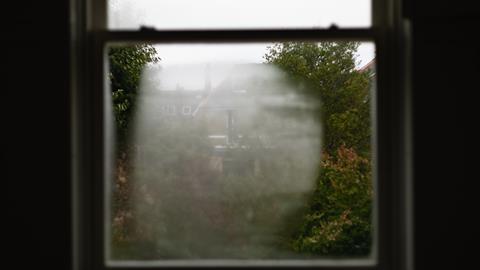 A prototype electrolyser has harvested water from the air, split it and collected hydrogen for green energy. The device was powered by solar energy and can operate in dry air with just 4% humidity.

‘This is the first electrolyser that can produce high purity hydrogen directly from air,’ says Gang Kevin Li, a chemical engineer at the University of Melbourne, Australia. A prototype worked for 12 days straight, with a Faradic efficiency of 95%, with five parallel electrolysers. It did not require any liquid water. 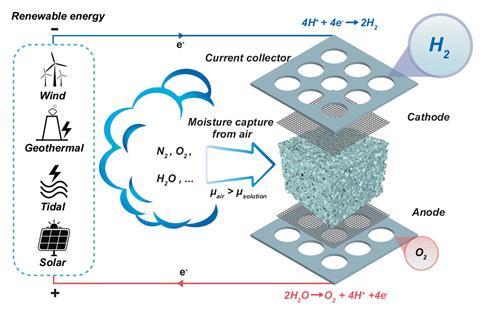 The Melbourne group, in collaboration with a team at the University of Manchester, noted that the device could provide hydrogen in extremely arid environments where water is scarce. For instance, the average humidity in the Sahel is around 20%, and around 21% at Uluru in the central desert of Australia.

The rig generated 745 litres of hydrogen/m2 of cathode per day when powered by off-the-shelf photovoltaics. Water was captured directly from the atmosphere in Melbourne, without the need for power.

A porous medium, such as melamine sponge or sintered glass foam, was soaked in an electrolyte such as potassium acetate, potassium hydroxide (KOH) or sulfuric acid. The electrolyte-soaked medium that worked best was KOH between nickel foam electrodes.

The water was absorbed into the KOH. Once a voltage of 2.5 to 3V was applied, water was split into protons and hydroxide ions. The protons move to the cathode and formed hydrogen, while oxygen formed at the anode.

Sulfuric acid was also tried as an electrolyte and was excellent at absorbing water. But it gradually degraded the melamine sponge, and required sintered glass foams and platinum mesh electrodes, adding to cost and complexity.

One issue with the KOH electrolyte is that carbon dioxide present in air reacts with KOH, converting it to K2CO3, and eventually KHCO3. ‘We now have a new recipe that is tolerant of CO2,’ says Li. 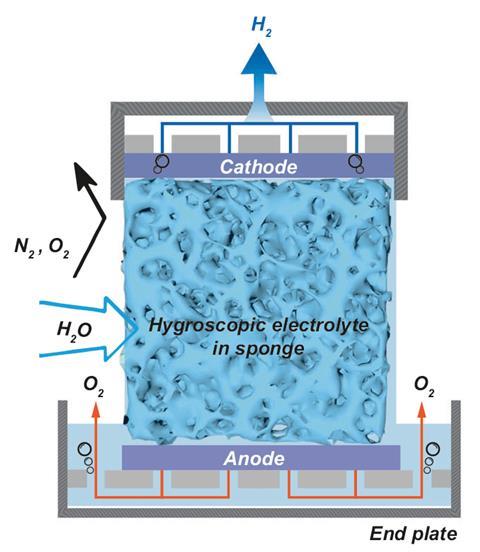 The researchers note that direct splitting of saline water generates chlorine products, whereas other approaches such as the use of metal–organic framework to generate freshwater alone are complex and expensive. ‘This technology solves a problem with a geographical mismatch between renewable energy sources and a water source, because the area with solar does not have the freshwater for hydrolysis,’ Li says.

‘The novelty in this study is the clever design of the separator between the cathode and anode that functions both as a moisture absorber that supplies water directly from air, and as the electrolyte that transports ions between the two electrodes to close the electrical circuit between them,’ comments Avner Rothschild, a materials scientist at Technion, Israel.

He notes, however, that there is ‘an intrinsic trade-off between the amount of moisture absorbed by the device, that scales with the thickness of the glass foam, and the electrical resistance – so called the series resistance – of the foam separating the electrodes. This trade-off results in low efficiency.’

Rothschild questions its efficiency compared with other strategies. Fuelling a car to drive around 600km requires 4kg of hydrogen. Producing this ‘requires 36 litres of water, which is equivalent to about half of the water uptake in [a] quick (6 minute) shower,’ he notes. ‘I think that one should ask the question whether developing a new [direct air capture] technology that is far less efficient than conventional electrolysis is really required.’