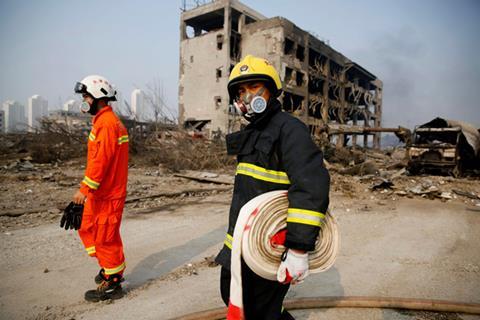 The recent blast in Tianjin port and other Chinese chemical plant accidents have prompted an overhaul of the country’s approach to safety amid accusations of corruption and mismanagement.

On 12 August, a warehouse in Tianjin erupted in an explosive blaze that killed dozens of people, and damaged and destroyed property. The warehouse had, among other things, been storing 800 tonnes of ammonium nitrate and 500 tonnes of potassium nitrate, as well as 700 tonnes of sodium cyanide and large quantities of calcium carbide. The death toll from the explosion now stands at 165, including 99 firemen, 11 police and 55 civilians, with eight people still missing.

Investigations into the causes of the accident are still ongoing, but a series of regulatory failures and breaches of legislation have been uncovered that contributed to the incident.

The warehouse belonged to Rui Hai International Logistics, a major chemical cargo storage and transport firm. It has emerged that Rui Hai did not adopt legally required sealing measures for storing some of its chemicals (though the exact details have not been released). Furthermore, the quantity of sodium cyanide was far in excess of the 10 tonnes Rui Hai was licensed to store and located much closer to residential areas than the minimum required distance; up to five residential blocks were located within 1km of the warehouse.

These failings may have worsened the situation dramatically when the first firemen to attend the incident – all of whom lost their lives – were not appraised of the site’s chemical inventory. Subsequent attempts to extinguish the fire with water caused further blasts that destroyed a large portion of the port and hundreds of nearby buildings, and engulfed firemen, Rui Hai staff and nearby residents.

The key question is why did people not follow the necessary rules and procedures?

‘Although the accident is very serious, based on available information I feel this is nothing different from a typical chemical accident – improper handling of chemicals and subsequent fire extinguishing measures,’ says Zhou Houyun, a chemical safety expert and chief editor of the journal Chemical Safety and Environment. However, Zhou feels that the answer is not tougher regulation. ‘The accident is unlikely to result in harsher chemical safety regulations, as we have already had the harshest ones. The key question is why did people not follow the necessary rules and procedures?’

Just one week before the blast, Rui Hai had passed a special safety inspection conducted in preparation for the military parade on 3 September in nearby Beijing to celebrate the 70th anniversary of China’s victory in the second world war. China’s top safety official, Yang Dongliang, director of the State Administration of Work Safety and former vice-mayor of Tianjin, has since been sacked by the Communist Party, and is now a suspect in a corruption investigation. One of Rui Hai’s major stakeholders has also been officially confirmed as a son of the former police chief of Tianjin port.

Miao Yu, minister of Industry and Information Technology, said on 29 August that nearly 1000 chemical plants across the nation are planning to improve safety, possibly involving Yuan400 billion (£40.6 billion) of relocation costs. ‘But the purpose of the relocation is not to leave Tianjin or other major chemical parks. Rather, it is a reshuffling of industrial layout,’ says Ye Yingmin, general manager of Chem1, a leading chemical consulting firm based in Beijing.

Ye told Chemistry World that the plans are part of a nationwide industrial strategy, which pushes high energy consuming firms to less populated and cheaper areas in central and western China, while strengthening petrochemical facilities in eastern coastal cities and moving fine chemical factories into chemical parks, also mainly in the east.

‘You can’t say chemical parks are more dangerous. With concentrated and integrated facilities, they should be relatively safer and cleaner,’ Ye adds.

The Tianjin accident has also drawn attention to fire control issues in the chemical industry. China’s major fire control force is a quasi-military service, numbering about 130,000 nationwide, which is supplemented by professional teams hired by hazardous industries. In recent years, with repeated reports of casualties among firemen, calls have increased for professional firemen to replace the fire service.

‘Professionalisation is necessary to improve and maintain the sophisticated techniques required for fire control in these industries,’ says colonel Yang Wenjie, director of the fire police department in northern Chinese city of Ulanqab.

Yang emphasises that the fire crews’ mishandling of the Rui Hai blaze resulted from poor management in Tianjin port. But he adds that the existing fire control system also needs to be changed to facilitate professionalism. So far only the fire service, and not professional teams hired by industries, has the power to enforce fire prevention measures and information sharing regarding potentially hazardous goods.