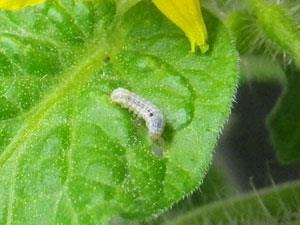 The cutworm can cause serious damage to tomato crops

Tomato plants not only take heed of their neighbours chemical ‘warnings’ but actually convert the signals into substances to defend themselves against imminent insect attack, researchers in Japan have discovered. They showed healthy plants absorb a volatile chemical given off by nearby caterpillar-infested ones, and convert it into a defensive compound that is toxic to insects.

‘Plants can synthesise a wide array of chemical weapons,’ explains Kenji Matsui from Yamaguchi University, ‘and the involvement of volatile organic compounds (VOCs) in plant–plant communication has already been reported.’ But this research, he adds, shows that not only do other plants detect these signals, but they can actually turn them into chemical defences.

When tomato plants are attacked by cutworms – larvae of the Spodoptera litura moth – they release various VOCs. Matsui’s team wanted to investigate the effects these VOCs have on nearby plants. They analysed leaf extracts from plants grown downwind of plants deliberately infested with cutworm, and found they contained higher levels of a glycoside called HexVic ((Z)-3-hexenyl-vicianoside) than controls. Feeding HexVic to cutworms confirmed it was a defensive compound: it supressed weight gain and decreased their chances of survival. It is not yet known, however, to what extent it deters the caterpillars from feeding on the plants in the first place. 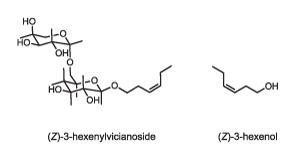 The team then investigated how HexVic was being produced in the pest-free plants. ‘We expected that [a mixture of] volatiles made the receiving plants more defensive through activating a signal pathway,’ says Matsui. But what they actually found was that one particular volatile released by the infested plants – (Z)-3-hexenol – was being absorbed by the pest-free ones and converted into HexVic. They were able to prove that (Z)-3-hexenol was being converted into HexVic by labelling (Z)-3-hexenol with deuterium and then spraying it onto the plants. The HexVic that the plants subsequently produced contained deuterium, showing that the tomatoes had used (Z)-3-hexenol to produce the insect toxin. Furthermore, there was no significant difference in levels of endogenous (Z)-3-hexenol between exposed and control plants, suggesting that HexVic was synthesised from the sprayed on (Z)-3-hexenol, rather than from the plants’ own (Z)-3-hexenol stores.

The team also found that other plants – including sorghum and rice – can produce HexVic, and think they could be using similar mechanisms to defend themselves. ‘We are now trying to isolate genes involved in the glycosylation of volatiles,’ says Matsui. ‘We hope that further in-depth analysis will bring novel technologies to apply these findings in agriculture.’

Ian Kaplan, who studies plant–herbivore interactions at Purdue University in the US, says the findings could help develop new approaches to pest control. ‘Cutworms are big pests for tomato and other crops,’ he says. ‘This kind of selective uptake of one specific compound and then conversion into a compound that is directly toxic to the caterpillar itself is unusual – it’s nice they show the signal is replicated across really diverse plants.’