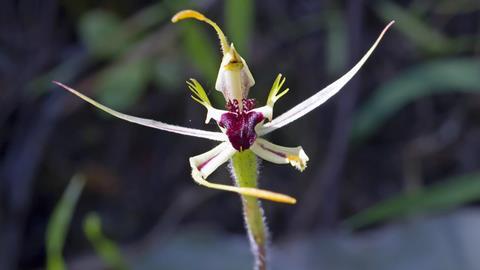 A set of hitherto unknown sulfur-based natural products that orchids produce to attract their wasp pollinators has been identified by researchers in Australia.

Orchids are known for having elaborate and unusual ways of attracting insects. Some species produce chemical signals that mimic the pheromones of a female insect in the hope that they can coat confused males with pollen as they try to mate with the flower.

‘There have been very few studies to fully elucidate the chemistry behind the pollinator attraction in these orchids,’ says Björn Bohman of the University of Western Australia, who led the work. ‘We suspect that our current understanding may rely on biased results in the literature, where there most probably is an overrepresentation of systems that could be identified with traditional, less time-consuming methodology.’

He explains that when looking at the spider orchid, Caladenia crebra, and its wasp pollinator, Campylothynnus flavopictus, he and his colleagues had to go beyond standard identification techniques, where male wasp antennae are used to screen extracts of orchid flowers or females for compounds the male can detect. ‘That technique did not work in this pollinator system. Instead we had to fall back on traditional “chemistry knowhow” and manually screen extracts for compounds that showed promising features in chromatography and mass spectrometry analyses,’ says Bohman.

After extracting flower and wasp tissues they used high resolution GC-MS to identify the compounds that were produced by the orchid and the female wasp to attract males. They found that male wasps are attracted by a blend of four sulfur-containing phenols, three of which are new natural products. They used experiments with live wasps to show that males could be enticed to mate with simple female dummies laced with mixtures of these compounds.

This is the first time sulfurous pheromones have been identified in wasps, and it is rare for flowering plants to produce sulfur-based volatiles. 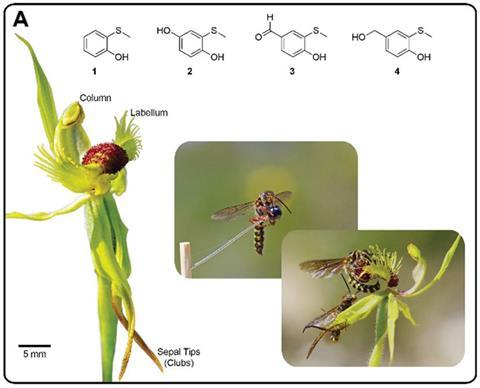 The four (methylthio)phenol attractants (top) are unusual as plants rarely produce sulfurous volatiles. Also shown is the structure of the orchid and a wasp caught in the act of pseudocopulating with a flower and pin spiked with synthetic semiochemicals

‘Identifying the exact chemical compounds involved in pollination is not only interesting in its own right, but it also allows [us] to then map the chemistry on top of the phylogeny of both flowers and pollinators to understand the evolution of highly specific pollination strategies,’ says Bohman. ‘We hope that our findings will inspire more collaborations between biologists and chemists, to dig deeper into the mechanisms and cues in specialised pollination systems.’

James Blande, who investigates plant volatiles at the University of Eastern Finland, says the work is ‘an excellent example of the lengths that should be taken to identify semiochemicals responsible for a broad array of interactions between plants and their insect community’.

‘The authors suggest that there could be a strong bias towards reporting pollination studies involving common compounds,’ he says. ‘This could indeed be the case, and may not be limited to pollination, but could be a common issue for studies of plant–insect interactions in general. [The study] highlights the need for in depth investigation of the chemicals underpinning pollination in other plants with specialised pollination systems.’

Bohman says his group is currently carrying out similar investigations of other orchid species.