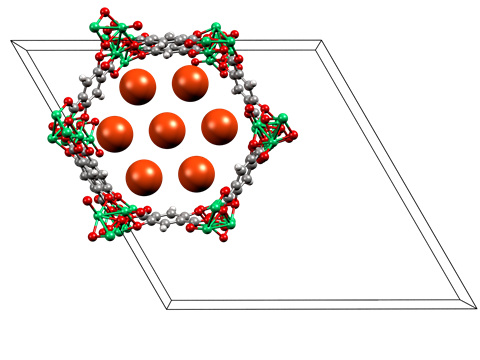 Neon molecules (orange) inside the pores of NiMOF-74

A team of scientists has discovered the first interactions between neon and a transition metal. Their discovery opens up the possibility of new methods to capture the inert gas, as well as other unreactive elements such as helium.

Although it’s found in advertising and eye-catching signage, neon is also incorporated into lasers used in the photolithographic printing of semiconductors. Neon is abundant in the universe, but its inert nature means that it escapes the Earth’s atmosphere. The noble gas is also hard to isolate. Current methods involve liquefying air and distilling the gas in a liquid form – an expensive and inefficient approach.

A team led by Peter Wood at the Cambridge Crystallographic Data Centre, UK, has discovered that, under particular conditions, the inert gas interacts with a transition metal. Not only is this the first interaction ever observed, but it may kick-start new approaches in capturing unreactive noble gases.

The group looked at how neon is adsorbed into two metal organic frameworks (MOFs) – PCN-200, a porous copper material, and NiMOF-74, a porous nickel compound – at low temperatures and high pressures (5–100bar). They captured the x-ray crystal diffraction data of the saturated MOFs and illustrated the neon interactions in both.

‘PCN-200 shows simple van der Waals interactions,’ says Wood. ‘But the NiMOF-74 shows an interaction between the neon and an exposed nickel, with short interaction distances and a notable physical change upon depressurisation.’

Russell Morris from the University of St Andrews believes this unusual interaction arises from the ‘desolation of the MOF allowing uncoordinated metal sites to form’. ‘The open metal sites are perfectly arranged to interact strongly with guest species and even something as generally unreactive as neon can interact,’ says Morris. ‘This shows the power of using the metal sites in MOFs to instigate interactions.’

Wood’s team are interested in improving the technique’s accuracy, but also developing the approach to allow selective capture of neon or other inert gases.