First ever observation of a neon-containing anion 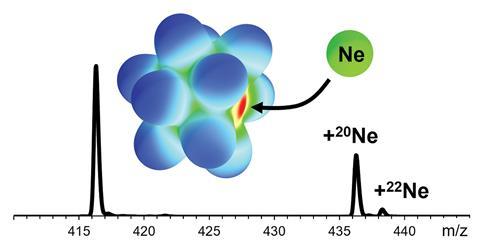 Researchers in Germany have succeeded in making a molecular anion that contains neon. Their method exploits the incredible reactivity of the superelectrophilic anion [B12(CN)11]– and creates a boron–neon bond.

Noble gases are the undisputed least reactive elements. But even the most inert noble gases – argon, neon and helium – have been known to join forces with other elements. And whilst neon has featured in isolated cations in the gas phase, it is yet to become an ionic compound.

Neon-containing cations, however, are unlikely to become compounds. Cations arising when a strong electrophile removes electron density from neon can indeed form a localised bond. The issue here is that forming a compound from these rare cations requires an anion, but an anion will oust neon from its electrophilic binding site within the cation. A neon-containing anion would solve this problem, but a successful synthetic strategy for making one has remained elusive. Even theoretical calculations had failed to find an answer.

Scientists have now found the ideal anion – one that despite being negatively charged overall has a strongly electrophilic free boron atom with a significant positive partial charge: [B12(CN)11]–, which they used to create [B12(CN)11Ne]–.

In practice, [B12(CN)11]– can only be synthesised within a mass spectrometer. But observing the molecular anion [B12(CN)11Ne]–, is an important step towards the prospect of a neon salt.

Correction: The title and first paragraph of this article were updated on 1 April 2020 to remove the word synthesis