Twist in the tale of improving gene therapy

New insights into the physical properties of different forms of DNA could help to improve gene therapy, chemists in Spain and India say. Gene therapy aims to cure disease by inserting functional genes into the DNA of living cells, but delivering the DNA into the cell remains a stumbling block. Emilio Aicart, at Universidad Complutense in Madrid, Santanu Bhattacharya, at the Indian Institute of Science in Bangalore, and colleagues say that their findings can explain why some types of DNA can transfect cells more efficiently than others.

Gene therapy was pioneered using viruses to deliver DNA into cells. However, viral vectors have a number of drawbacks which limit their use for in vivo therapeutic gene delivery, not least their interactions with the host organism’s immune system. Synthetic delivery vehicles might be able to get around these problems.

Aicart and Bhattacharya are studying a delivery system that involves mixing DNA - which is naturally negatively charged and surrounded by counterions when in solution - with positively charged lipid molecules. As the DNA and the cationic lipid (CL) mix, the counterions are shed and a ’lipoplex’ forms. But the transfection efficiency of lipoplexes varies - the process works better for DNA rings known as plasmids than for linear DNA. 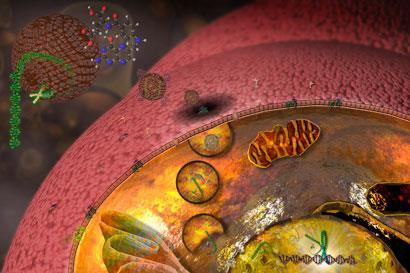 Aicart and Bhattacharya have now shown why this might be the case. Unlike linear DNA, plasmid DNA can form tight ’supercoils’, Bhattacharya explains. ’Because of the peculiar conformation of supercoiled plasmid DNA, we found that some of the counterions are trapped,’ he says.

’This is the first time that it has been shown that there is a significant difference in the physical properties of plasmid DNA and linear DNA, and so their possible utility in biological applications,’ Bhattacharya adds. The result of these trapped counterions is that less CL is needed to form the lipoplex. As CL is cytotoxic, using less of it makes transfection more efficient, the researchers say.

From a physicochemical point of view, the research is interesting, says Colin Pouton, who researches DNA delivery systems at Monash University, Australia. However, while cationic complexes can work well in cell culture, non-specific interactions hamper their use in vivo, he says. ’Unfortunately, the synthetic systems are thousands or tens of thousands of times less efficient than viruses,’ he says. ’We know a bit about how viruses work, but we haven’t managed to reproduce that level of efficiency in a synthetic system, and that’s the challenge.’

Bhattacharya agrees that lipoplexes are at present far less efficient transfection agents than a viral vector. ’But you have to go stepwise,’ he says.   ’Viruses come with the immune reaction baggage, so they cannot be used for clinical purposes.’ The team are currently assessing whether their findings hold for different kinds of lipid, before assessing its potential for in vivo work.