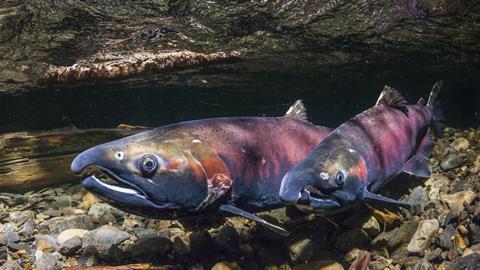 After several years of chemical detective work, researchers have identified the culprit that kills up to 90% of salmon as they return to their spawning streams in the American Northwest each autumn – a compound in car tyres.1

Edward Kolodziej and Zhenyu Tian from the University of Washington Tacoma, US, and colleagues identified the long-suspected but undiscovered poisonous substance – 6PPD-quinone – as originating from worn tyre fragments. At amounts similar to those measured flowing into salmon streams during autumn rainstorms, 6PPD-quinone killed Coho salmon in experiments within five hours.

Every autumn in urban streams around Seattle, many Coho salmon that return to spawn die when it rains. While there had been clues of what causes this urban stream syndrome as early as 2005,2 the exact cause of their deaths remained mysterious. Storm water is a very complex mixture, stresses Tian. ‘You will see thousands of chemical features in these mixtures, and most of them are still unknown,’ he says. That motivated the team to query whether one of these substances was killing the salmon. ‘We are producing and using hundreds of thousands of anthropogenic chemicals, so these are inevitable results,’ Tian says. 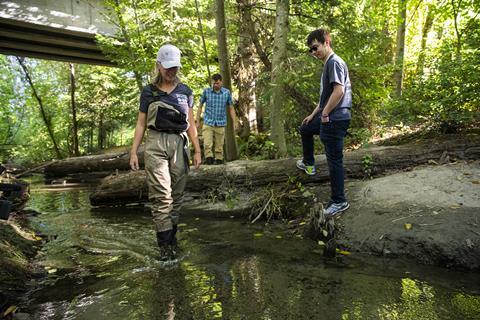 Previously team member Jenifer McIntyre from Washington State University, US, had led a related study showing that solutions made from tyre particles were toxic to salmon. The team had also shown that waters linked to salmon deaths had very similar chemical profiles to runoff from roads. However, because these waters are complex mixtures they are ‘difficult to work with’, Kolodziej stresses. The classic chemistry approach of separating components using chromatography and identifying them using mass spectrometry initially detected over 2,000 molecules and fragments to trawl through.

Over the last three years, Tian therefore adopted better equipment to handle that. ‘We are one of the first groups using high-resolution mass spectrometry for water quality analysis of roadway runoff, so we brought some new tools to a longstanding problem,’ Kolodziej explains.

The troublesome water samples remained toxic after the researchers filtered them through materials that removed metals and strongly ionic substances. After four separation stages, they cut down the list of candidates by around 90%, and further eliminated all possible currently known options. The team then moved on to ‘a serious separation to resolve a toxicant from this complex mixture’, Kolodziej says, ultimately identifying a substance with the formula C18H22N2O2. 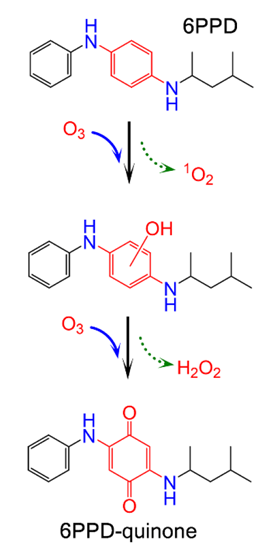 That formula had never been reported as toxic before, so the team presumed it had been transformed from something else in the environment. Looking at the likely reactions suggested a breakdown product of N-(1,3-dimethylbutyl)-N’-phenyl-p-phenylenediamine, or 6PPD. 6PPD can comprise up to 2% of vehicle tyres, being added to help stop the rubber degrading in reactions with ground-level ozone. 6PPD, whose formula is C18H24N2, reacts with ozone to make a substance with a formula of C18H22N2O2, which the team calls 6PPD-quinone. The team then checked waters from Los Angeles and San Francisco, and found 6PPD-quinone in them too.

‘This finding is certainly alarming,’ comments Susanne Brander from Oregon State University, US. She calls 6PPD-quinone a ‘newly discovered and clearly ubiquitous’ pollutant that is likely ‘causing toxicity across the entire food web’. ‘The authors have provided a strong case for the need to remove 6PPD from tyres and thus aquatic ecosystems,’ she concludes.

McIntyre notes that we don’t yet know how 6PPD kills salmon, and that the researchers therefore want to find out. ‘We will also test whether the newly discovered chemical can explain differences in sensitivity to stormwater that we see among salmon species,’ she says. Kolodziej adds that identifying 6PPD-quinone can help improve water treatment efforts and develop more sustainable products for use in tyres.