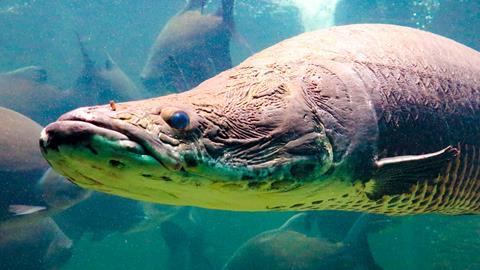 The scales of Arapaima gigas – one of the largest freshwater fish on Earth – have been revealed to be one of the toughest flexible materials found in nature. The discovery by a team of researchers based in California points to a way of improving lightweight armour. However, shortcomings in 3D printing means that scaly bulletproof vests may be a while off yet.

Arapaima is a 3m long fish found in the Amazon river, where it lives in piranha-infested waters. The scales of this fish are notable for two reasons – not only are they resistant to attacks from predators, they’re also flexible, keeping the animal nimble and helping it to manoeuvre. With piranhas well known for their powerful bite, the researchers were curious as to how Arapaima survived in the dangerous waters of the Amazon river.

After obtaining scales the team began testing their toughness. To do this, they put a crack into one of the scales and measured how much stress or strain it took for that crack to propagate throughout the structure. They were surprised to learn that the scales were some of the most fracture-resistant materials found in nature. So, what makes them so tough?

‘The base of the scale is a hard-outer layer,’ says Robert Ritchie at the University of California, Berkeley, who co-supervised the study. ‘It’s all collagen and mineral, just like bone is, but it’s a lot more mineralised on the surface, which makes it harder.’ This is coupled with a softer inner-layer of collagen fibrils. Using electron microscopy to image the inner layer, the team realised that the fibrils resembled a spiral staircase – a so-called Bouligand structure. This means that if a predator breaks through the tough outer layer, the fibrils can deform and unravel along different angles, preventing the crack from growing. ‘It’s a particularly potent means of resisting fracture,’ Ritchie adds.

This coupling of hard and soft layers is similar to how body armour is designed. However, while nature builds from the molecular ground up, creating a gentle gradient between the layers, synthetic materials use an adhesive, creating a sharp interface. This interface, explains Ritchie, is where the layers tend to come apart or fracture, weakening the material.

Wen Yang, also at Berkeley, who helped carry out the experiments, notes that the team are working on mimicking the helical structures, but that it’s challenging with conventional design techniques. ‘3D printing does offer the potential, once all the bugs are sorted,’ adds Ritchie.

‘I was really surprised to see the same properties used to strengthen composite materials in a fish scale … it really makes sense,’ says Jan-Henning Dirks, a professor of biological structures at City University of Applied Science in Germany. ‘It’s some really interesting work by some people who know what they’re talking about.’