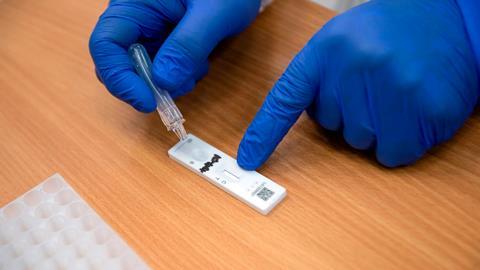 The UK government has decided to pause its plans to introduce daily lateral flow tests (LFTs) in schools for contacts of positive Covid-19 cases as an alternative to isolation. But it is continuing to roll out LFTs for regular asymptomatic testing in educational settings and the community. Concern is growing in the scientific community that the devices will lead to the virus spreading further as they were not designed for mass self-testing. However, others believe that they have a role to play if used appropriately.

The government had asked schools to allow contacts of positive cases to attend classes if they agreed to daily testing for a week. But a recent statement from Public Health England and Test and Trace acknowledged that the balance between the risks and benefits for daily contact testing is unclear. What’s more, the Medicines and Healthcare products Regulatory Agency (MHRA) says it hasn’t authorised LFTs manufactured by Innova for ‘serial’ testing of positive case contacts in schools.

In December, MHRA authorised Test and Trace to use Innova tests as ‘self-test’ devices to detect infection in asymptomatic individuals. Positive cases would confirm the result with a PCR test.

Lateral flow tests are a well-established tool for detecting a variety of analytes and include pregnancy tests, as well as devices that can test for a range of diseases such as HIV, malaria and hepatitis C. The Innova devices test for antigens but LFTs can also detect antibodies.

The government, which has spent at least £1 billion procuring LFTs, is encouraging all local authorities to use mass testing for people who cannot work from home during lockdown. Health secretary Matt Hancock says regular lateral flow testing is ‘highly effective’ and has already been ‘hugely successful in finding positive cases quickly’.

But many scientists disagree. Angela Raffle, consultant in public health at the University of Bristol Medical School, says the further rollout of LFTs is very worrying. She points out that the manufacturers only recommend the Innova device for use by qualified medical practitioners on people with symptoms. ‘For the government to claim that these tests are accurate, reliable and “hugely successful” is dangerously misleading.’

Data from community testing carried out by trained staff in the Liverpool LFT pilot, showed 60% of people who had the virus got a negative result from the Innova device, and a third of those who had high viral levels were wrongly told they were infection-free. Preliminary data from University of Birmingham students found only 3.2% of those infected with the virus were correctly given a positive result.

‘Any benefit from finding symptomless cases will be outweighed by the many more infectious cases that are missed by these tests,’ Raffle says. ‘Already outbreaks are known to have occurred because people have been falsely reassured by a negative lateral flow result, leading them to attend work whilst having symptoms.’

A new preprint from the University of Oxford, however, concluded that LFTs can detect most people who would otherwise go on to infect someone else. Their modelling suggested that LFTs should be effective at detecting up to 90% of the infections that individuals then passed on to their contacts. ‘We know that lateral flow tests are not perfect, but that doesn’t stop them being a game changer for helping to detect large numbers of infectious cases sufficiently rapidly to prevent further onward spread,’ said Tim Peto, professor of medicine at the University of Oxford and senior study author.

The study was based on an analysis of Test and Trace records, and predicted whether four different LFTs would have picked up the most infectious cases. Several commentators point out that the predicted sensitivities appear to be ‘best-case estimates’ and don’t account for the 10–20% of swab failures, poorer performance when used outside laboratories, and the different distribution of viral loads in different asymptomatic groups. The authors conclude that their approach needs to be evaluated in real-world settings.

A statement supporting the use of LFTs has also been signed by 14 public health scientists including Susan Hopkins, interim chief medical adviser from Public Health England. The statement claims that the devices have identified 27,000 infected people in the UK who would not otherwise have had to self-isolate.

Only option for mass testing

Jon Deeks, professor of biostatistics at the University of Birmingham, thinks the government’s plans risk worsening the Covid-19 situation in the UK. ‘The government only appears to focus on detecting asymptomatic cases and not the harms which are caused by misinforming people that they don’t have Covid-19, when in fact they do,’ he says. ‘Alongside this, the government has misleadingly overstated the test’s accuracy, wrongly telling schools and parents that Innova tests were as accurate in identifying cases as PCR testing. The combination of such high numbers of false negatives with such wrong information will lead to tragic consequences. Innova is unfit for purpose.’

However, the tests do work very well in those with symptoms – they were designed to detect the virus at higher viral loads, Deeks adds. ‘The problem is the UK is using them in people who do not have symptoms. With Covid-19, the viral load changes considerably during infection, and you may miss people who have recently been infected. The test is not good at saying people are “safe”, which is what the government want to use them for.’ But LFTs do have a benefit compared with PCR, he adds. ‘PCR will stay positive for days, and possibly weeks after somebody has cleared the infection, whereas LFTs do not.’

Using LFTs in mass testing must be underpinned by a clear public information campaign about the meaning of a negative test result, stresses Jose Vazquez-Boland, chair of infectious diseases at the University of Edinburgh. He believes that the tests are a complementary tool. ‘If there is no other alternative, applying these tests is better than nothing,’ he says. ’I would argue that the impact of false negatives would be outweighed at population level by the benefits of identifying and isolating as many asymptomatic transmitters as possible in terms of reducing virus circulation. We have to be clear that systematic mass regular testing is the only means we really have to control the pandemic even with vaccination.’