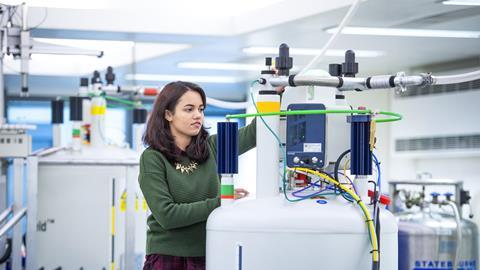 Without state-of-the-art equipment, the UK risks losing its position as a world leader in many areas of research

The UK has made some progress in updating and renewing its NMR infrastructure over the past four years, but significant gaps in capacity remain, according to a new report. The country also continues to lag behind international competitors such as France and Germany that can field twice the number of ultrahigh powered instruments.

The report, written by Mark Smith, vice chancellor at Lancaster University, in collaboration with the Engineering and Physical Sciences Research Council (EPSRC) and other research councils, provides an insight into how this landscape outside clinical applications has changed since the last one in 2012. It sets the scene for an open meeting in London on the 24 February that will discuss current NMR provision and how the community should spend the £22 million capital investment earmarked by government for ultrahigh/very high field NMR across the sciences.

The 2012 survey was sparked by emerging evidence that the UK’s NMR infrastructure was outdated and failing to meet demand. A call from the EPSRC for ‘core capacity chemistry’ attracted 20 bids from 22 universities all asking for NMR equipment as a matter of some urgency. The council recognised that without modern state-of-the-art NMR equipment, the UK’s position as a world-leader in many areas of research would soon be eroded. But with decreasing capital resources, there was also a need for a more sustainable equipment infrastructure.

Four years on, explains Smith, it is time to take stock, in part to see if there has been improvement in the country’s NMR infrastructure and in readiness for the new £22 million investment. Since the money is for use across all sciences, the 2016 survey included life science departments. In total, 43 universities and research institutes contributed.

There has been some progress since 2012. The recommendations for a 600MHz dynamic nuclear polarisation (DNP) facility, for example, is now up and running at the University of Nottingham and the average age of instruments has fallen. ‘It is clear there has been significant investment in the UK’s NMR infrastructure since 2012,’ Smith says. ‘The stock has become newer and more modern – equipment less than two years old and less than five years old has both increased. There has also been some progress in upgrading ageing equipment, though there is still a legacy of instruments over 20 years old, which are becoming obsolete or are in poor condition and this needs to be addressed.’

The report recommends developing a more systematic approach to upgrading or retiring instruments, alongside national replenishment schemes to ensure institutes have good research capabilities. A call is also made for more clarity on the relationship between funding bodies and universities, and a better understanding of whose responsibility it is to fund what.

‘Regardless of any plans for very high-field equipment, it is the medium- to high-field instrumentation that underpins a wide range of synthetic and materials chemistry, and researchers need easy, rapid access to this, preferably within their own departments,’ says Sharon Ashbrook, professor of physical chemistry at the University of St Andrew’s. ‘It is not clear at present how this will be funded and maintained.’ The situation is further complicated, she says, by the different ways in which NMR instrumentation is used, with some equipment providing more of a high-throughput service, and some providing support for less routine experiments, as well as more cutting-edge research in magnetic resonance and its chemical applications. This all needs to be factored in to any future funding model, she adds.

The survey highlighted that in the UK, there are only two ultrahigh 950MHz NMR instruments for solution state NMR and one 850MHz facility for solid state work. In contrast, France and Germany have at least twice this capability. ‘At below 800MHz, the infrastructure is highly competitive nationally, the key challenge now is to make it competitive above 800MHz in line with its European neighbours,’ says Smith.

At the open meeting later this month, the community will get the opportunity to discuss the best way to spend the £22 million. For example, would it be better to have access to two 1GHz instruments – one for solid-state and one for solution NMR – or would a better scenario be a larger number of 900MHz instruments and upgrades of 800MHz ones?

‘High-field NMR is crucial for research at the chemistry–life sciences interface, as it enables dynamic structural and mechanistic studies with biomolecules in a way other methods can’t,’ explains Gerd Wagner, reader in medicinal chemistry at Kings College London. ‘These samples can often be fragile, so onsite access would be a distinct advantage for such applications. State-of-the-art high field NMR also enables unprecedented studies into the interactions between small molecules and biomacromolecules, which underpin much of drug discovery and chemical biology.’