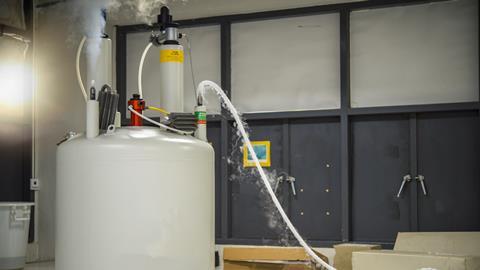 Eight universities will receive a total of £20 million from the UK’s Engineering and Physical Sciences Research Council to upgrade their nuclear magnetic resonance (NMR) facilities. Two 1GHz systems – the most powerful spectrometers on the market – will be installed at Birmingham and Warwick. The funding comes more than one year after a report called for urgent investment to update NMR infrastructure in the UK.

Scientists use NMR to gather structural information on anything from small molecules to large biostructures like proteins. NMR signals can identify individual atoms and the signal’s shape carries information on how the atoms are interconnected. Spectrometers with stronger magnetic fields – expressed in hertz as the resonance frequency for hydrogen – can uncover finer atomic details.

With most university spectrometers operating at field strengths between 400 and 600MHz, the UK lags behind other leading countries such as France and Germany. ‘In recent years the UK had come off the pace in terms of the very highest fields available to our community compared to our major international competitors,’ said Mark Smith from Lancaster University, who in his 2017 report recommended a £22 million investment in powerful NMR facilities. No 1GHz facility currently exists in the UK.

The funding will allow eight universities to install new systems or upgrade their existing machines to at least 800MHz. Some universities will retrofit their instruments to make solid state spectroscopy or high-pressure analysis possible. ‘This is a hugely welcome boost for UK research to be able to compete with the very best,’ Smith said.