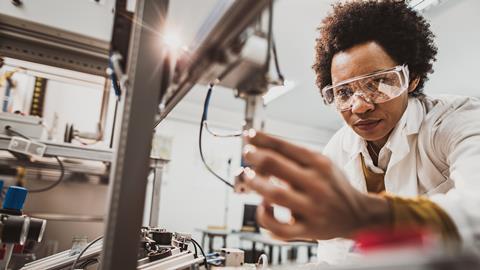 The UK Engineering and Physical Sciences Research Council (EPSRC) has announced its plan to tackle persistent under-representation of women in the physical sciences and engineering by trying to address gender bias in peer review.

Previous analysis by EPSRC in September 2020 revealed that female principal investigators (PIs) make up between 11 and 15% of the total applications for the agency’s research grants in a given year, and although EPSRC awards a similar number of grants to men and women, they are not of equal value – women consistently apply for smaller grants. Since 2007, only 6% of applications for large grants worth more than £10 million were submitted by female PIs.

To address these disparities, the EPSRC has been working to develop strategies that encourage more female physical scientists and engineers to apply for its research grants, especially large ones. The agency initiated a survey to gather the community’s perspectives on its previous findings, and the results will help to shape the EPSRC’s new equality, diversity and inclusion (EDI) action plan that will be published later this year.

Survey respondents were primarily mid-career and senior career researchers, and most attributed the low number of applications for larger grants from women to deadlines that conflict with school holidays, as women are still usually expected to take the lead in parenting. This is on top of institutional barriers and a culture that favours men or more established researchers. A clear majority of those scientist who filled out the questionnaire also agreed that female applicants for large research grants are disproportionately affected by barriers like bias in peer review, as well as limited access to networks and opportunities for support.

EPSRC now plans to take several steps to address the problem, including piloting unconscious bias observers in its grant funding panels. ‘Bias in peer review was another key barrier experienced by respondents to the survey,’ the agency said. ‘This issue is complex as it involves addressing wider institutional biases from experiences of the system and brought into the peer review process by the reviewers themselves.’

Guidance is needed from UK Research and Innovation (UKRI) about how peer review should be conducted, and the implementation of systems to ensure accountability in situations where bias is identified to have led to unfair decision-making, according to the EPSRC. The agency noted that a critical evaluation of peer review panel interviews is important, including double-blind review until interview stage.

The EPSRC will also launch an independent investigation of all types of bias in peer reviewer comments and score, including partiality based on race, sex and age. The goal is to better understand implicit reviewer bias and how to reduce this impact by using alternate approaches to ensure a fair research funding system. The agency will conduct this review together with the UKRI review of peer review project laid out in last year’s UK government people and culture strategy.