Immunoassay recognises immunoglobulins for both peptide and carbohydrate epitopes

Scientists in the US have developed an ultrasensitive procedure for spotting anti-peanut antibodies in blood.

Peanut allergies are recognised as one of the most serious food allergies, sometimes being fatal, and the severity of one’s allergy can change or develop over time. Diagnosis tends to combine medical history with clinical assays but often fails to indicate how severe an allergy is.

James Rusling, from the University of Connecticut, and colleagues, hope to develop their immunoarray into a system that diagnoses the severity of a patient’s peanut allergy. Their surface plasmon resonance (SPR) array is the first of its kind to record measurements using both carbohydrate and peptide epitopes from glycoprotein Arachis hypogaes h2 (Ara-h2). Ara-h2 is the most potent allergen from the Arachis hypogaes family, the major peanut allergens for sufferers. 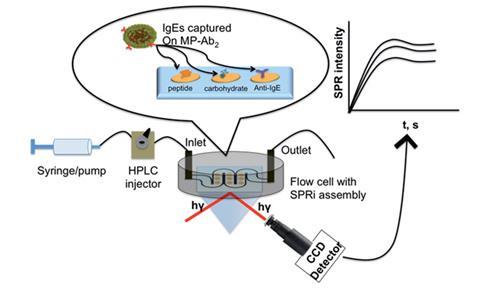 Rusling explains that using both peptide sequences and carbohydrate residues is an important area of investigation as both have been implicated in binding to immunoglobulin E (IgE) antibodies formed in the body in response to peanut allergies. ‘Therefore, we believe that detecting antibodies by using a panel of peptide and carbohydrate residues is a promising strategy to accurately diagnose allergy as it is hoped that it may provide a “fingerprint” that will correlate to the severity of a person’s allergy.’

The approach also prevents any potentially interfering biomolecules from entering the array by pre-capturing the desired antibodies with magnetic beads. The beads also act to amplify the response of the SPR signal. This method facilitated the detection of antibody concentrations as low as 0.5–1pg mL–1.

Spectroscopy expert Tia Keyes, of Dublin City University, Ireland, is impressed by the new immunoarray and the low level of detection it reaches. ‘This is an exciting advance in ultrasensitive detection and an improvement on current detection strategies for IgEs, which will undoubtedly find a much broader application in bioanalysis and diagnostics.’

Marcos Alcocer, a food allergy expert at the University of Nottingham, UK, highlights the development required, commenting that it is ‘interesting initial data, however, the ability to discriminate the glycan or the allergen (selectivity) has not been convincingly demonstrated.’ Going further to say that it is ‘a potentially useful technique, but not quite yet the claimed high throughput array’.

The future of this work rests in the development of differentiating the IgE antibodies against a variety of peanut allergen peptides and carbohydrates.