Uncovering the sources of contaminated sanitisers

Since June, 160 alcohol-based hand sanitisers containing toxic contaminants have been identified by the US Food and Drug Administration (FDA). Testing has revealed methanol contamination ranging from 1% to 80%, while other products are tainted with 1-propanol. This poses significant health risks given the increase in use of such products driven by the Covid-19 pandemic

Several people have died after ingesting the contaminated sanitisers and there have been reports of other adverse events from their use, including blindness, cardiac arrest, effects on the central nervous system and hospitalisations. 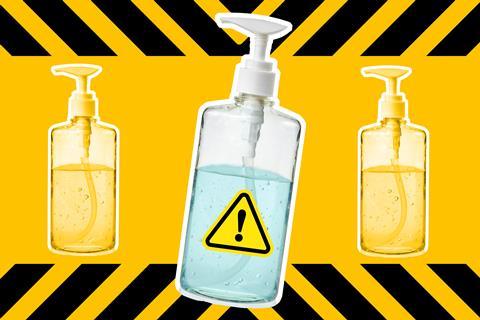 US authorities have found methanol contamination between 1% and 80% in ethanol-based sanitisers. It’s likley most of this is unintentional, but deliberate adulteration cannot be ruled out

‘This contamination seems largely unintentional, but the possibility of deliberate adulteration cannot be ruled out’ says Hamid Merchant, subject leader in pharmacy at the University of Huddersfield, UK. ‘There’s a lot of room for genuine mistakes and errors due to the circumstances brought by the pandemic.’

As Covid-19 spread globally, hand sanitisers quickly disappeared from supermarket shelves, compounded by shortages of their key ingredients: ethanol, isopropanol and glycerine. The surge in demand led to non-traditional manufacturers such as breweries, perfumeries and start-ups rushing to produce ethanol and sanitisers.

The FDA says it was not aware of methanol or 1-propanol substitution in hand sanitisers before the pandemic, and has declined to speculate on the likely causes while its investigations are ongoing. ‘Almost all of the hand sanitiser manufacturers [whose products are contaminated] are newly registered facilities,’ the agency said in a statement.

Industrially, methanol is predominantly produced from methane by steam reforming. But it can also be a byproduct in ethanol fermentation, depending on the sugar source, yeast strain and conditions. Following fermentation, industrial manufacturers separate the methanol from ethanol by distillation.

‘There are different grades of ethanol depending on their use,’ says Merchant. ‘Some will be less purified and contain more methanol. The higher the grade, the more expensive.’ He suggests one route for contamination is producers using the wrong grade by mistake – for example ‘if the supplier unintentionally supplied the wrong grade, or intentionally wasn’t forthcoming about the grade’.

Ethanol not intended for human consumption is usually ‘denatured’ in some way to make it unpalatable. While many suppliers use specialised denaturants that are extremely bitter, methanol is also used (making methylated spirits) providing a possible explanation for the higher levels of methanol contamination seen in some sanitisers. ‘Purified ethanol is expensive, highly taxed and is a controlled substance. So it is often easier to use denatured ethanol, which is cheaper, more convenient in terms of logistics and storage and produces a cheaper end product,’ Merchant explains. ‘Manufacturers have had to look for alternative supplies, probably from new suppliers or other countries.’ It’s likely that some of the denatured alcohol from these suppliers contained methanol rather than other, non-toxic denaturants. The FDA is encouraging producers to check their materials more rigorously, especially from new suppliers.

Industrial ethanol made by hydrating ethylene will also contain methanol as a by-product. While this ethanol should not be being used for consumption or in healthcare products, it’s possible some could have made its way into sanitisers given the shortage of other supplies. Similarly, Merchant suggests 1-propanol contamination is likely an impurity from isopropanol manufacture by hydrating propene. ‘The impurity is controlled to varied acceptable standards depending on the grade of isopropanol and its permitted use. A poor-quality grade may have higher or uncontrolled levels of 1-propanol.’

Merchant adds that, in many countries, hand sanitiser is not controlled or regulated like medicines. ‘There are no check-ups, no formal quality control, no regulatory process and no stringent labelling regulations. It’s very easy for a new product to enter the market and for new manufacturers to either not know of the standards or take advantage of the situation. This situation allows contamination to occur.’