A simple and effective procedure to incorporate strongly-emitting inorganic clusters into nematic liquid crystals has been reported by a team from France. By combining the supramolecular paradigms of host–guest chemistry and electrostatic interactions the team have overcome previously insurmountable limitations of liquid crystalline materials. 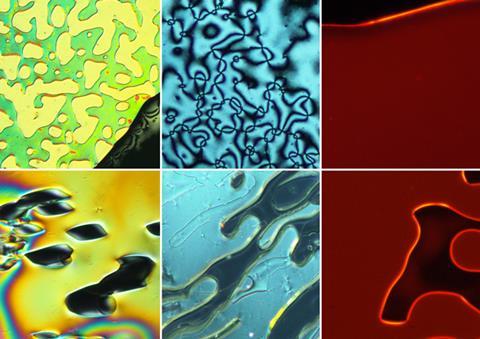 Liquid crystals, which exhibit long-range directional order but also flow like a liquid, are a prominent feature of modern technology. They are commonly used as temperature sensors and their nematic phase is an integral component in liquid crystal display (LCD) technology.

Inspired by the supramolecular concepts for which Pedersen, Cram and Lehn received the 1987 chemistry Nobel prize and building on his group’s previous work in creating new hybrid materials, Yann Molard and colleagues at the University of Rennes have for the first time succeeded in including bulky inorganic polyanions as part of a liquid crystalline phase. 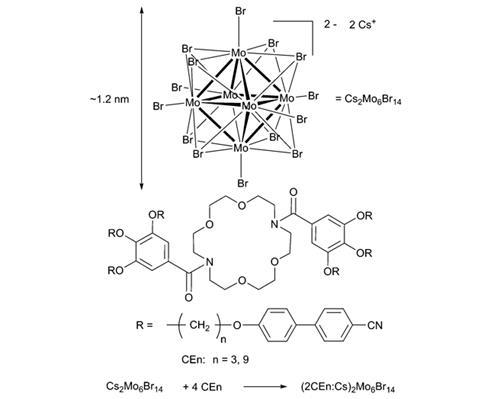 Molard describes the challenges surrounding liquid crystals as threefold: make it nematic; keep it homogeneous and stable; keep it luminescent. The method developed by his group maintains the powerful luminescent properties of the native inorganic nanoclusters whilst incorporating them in a stable and malleable material that self-assembles. This integration of bulky inorganic constituents in an organic matrix was unexpected but especially intriguing because it avoids undesirable light scattering caused by phase segregation. Previous approaches could not avoid phase segregation, or they reduced the luminescence of the metallic core following covalent modification.

Liquid crystals expert Torsten Hegmann, of Kent State University in the US, considers this work ‘a great addition to the family of nanomaterials and well-defined clusters displaying liquid crystalline behaviour.’ Given the nature of the components and their interaction, ‘the formation of a nematic liquid crystal phase is most unusual.’

Although this is still fundamental research, there are potential applications in LCD technology on the horizon, particularly given the very real difference in cost and geographic accessibility between molybdenum and the currently used rare earth elements, as well as iridium or platinum.

Meanwhile, Molard hopes that others keep in mind the simplicity of the method: a simple mixing in appropriate ratio.