Postdoctoral students are paid too little and have poor employment opportunities, a National Academies committee concludes 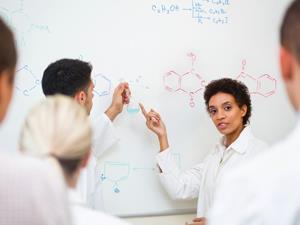 The US National Academies is urging significant changes to improve the country’s postdoctoral training system. A panel concluded that postdoctoral researchers should spend more time on training and mentoring, and less time performing research in the lab.

The panel also recommended that the salaries of postdoctoral researchers should be increased to better reflect their value and the contribution they make to research. In the US, the salary for postdocs set by the National Institutes of Health is $42,000 (£26,724), and the report suggests that figure should be at least $50,000, with annual inflationary increases.

‘Concern about the postdoctoral training system has been gnawing at the research community for decades,’ the report says. ‘The sources of uneasiness have changed only slightly over time. Is it really necessary for someone to remain in training until their mid-30s before being qualified for his or her chosen career track?’ the committee asks.

Given current research spending in the US, the report points out that the practice of hiring postdoctoral researchers to staff laboratories has created a situation where there are more postdocs than there are positions that require advanced training.

The percentage of PhDs who pursue postdoctoral training has been growing steadily and broadening from the biomedical and physical sciences to engineering and the social sciences, according to National Academies data. The report estimates that 60,000 to 100,000 postdoctoral researchers in the US now work in various research fields, and the average length of time researchers spend in postdoctoral positions also seems to be increasing.

Significantly fewer than half of all postdoctoral researchers continue into academic tenure track positions. And an increasing proportion end up outside of academia in posts that do not require years of advanced research training, according to the National Academies.

‘This report calls attention to a very serious problem that has not been solved involving the integrity of the graduate education process,’ says Bassam Shakhashiri, a chemistry professor at the University of Wisconsin and 2012 president of the American Chemical Society. ‘We make promises to graduate students when we recruit them, like that they will embark on a productive career,’ he tells Chemistry World. However, there are more people entering graduate school and eventually becoming postdocs, and the amount of support for the enterprise is waning. ‘It is less money and more people,’ Shakhashiri says.

Gregory Petsko, a neuroscience professor at Weill Cornell Medical College, US, and chair of the committee that wrote the report, agrees. ‘The number of postdocs has continued to increase dramatically, and the number of academic jobs, and even in some cases industrial jobs, has not increased at all,’ says Petsko. ‘The system is unsustainable in the long-run and something needs to be done.’ The automatic industrial career option that chemists used to be able to count on in the chemical or pharmaceutical sectors is no longer a given, according to Petsko.

But more data is required to address the problem. Petsko says it is ‘a disgrace’ that research institutions often don’t know how many postdocs they employ. He also says universities don’t tend to collect information about the kinds of jobs their postdocs end up in. ‘Most places don’t track that, but we have to know how the system is working,’ Petsko says.

The National Academies report proposes that the National Science Foundation create and update a database that tracks postdoctoral researchers, including those who are non-academic and foreign trained.