The US government agency that regulates workplace safety is proposing to fine DuPont for the second time in a matter of weeks, because of lapses in its worker safety practices. The US Department of Labor’s Occupational Safety and Health Administration (OSHA) has conducted a second inspection following a November 2014 methyl mercaptan leak at DuPont’s chemical manufacturing plant in La Porte, Texas, which killed four workers and hospitalised another. 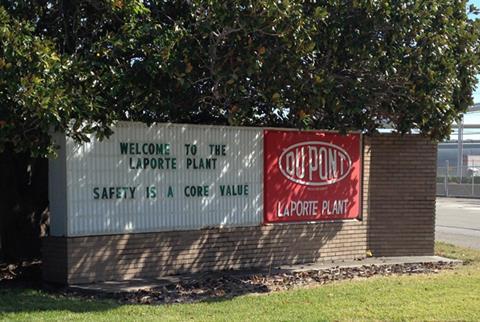 DuPont has shut down a herbicide production unit as a result of new inspections, and is expected to be fined again

In this latest inspection, the OSHA found three ‘wilful’, one ‘repeat’ and four ‘serious’ violations at the La Porte facility overall. The regulator placed DuPont on its ‘Severe Violator Enforcement Program,’ which concentrates resources on inspecting employers seen as demonstrating indifference towards a safe and healthy workplace, and mandates follow-up inspections. In addition, the OSHA proposed that DuPont pay $273,000 (£175,000) in penalties for these newly identified violations.

‘DuPont promotes itself as having a “world-class safety” culture and even markets its safety expertise to other employers, but these four preventable workplace deaths and the very serious hazards we uncovered at this facility are evidence of a failed safety programme,’ stated OSHA assistant director David Michaels. He expressed hope that the OSHA’s continued scrutiny of this facility and into working conditions at other DuPont plants will prevent similar losses in the future. ‘We want DuPont and the chemical industry as a whole to hear this message loud and clear,’ Michaels said.

In May, OSHA concluded from its earlier inspection that DuPont didn’t take the appropriate steps to safeguard its workers after the methyl mercaptan leak at the La Porte facility, citing the company for 11 violations and imposing a fine of $99,000.

For its part, DuPont says it has reviewed and is addressing the process safety management issues raised by the OSHA’s inspection. ‘We take very seriously the issues surrounding the scheduling, performance and documentation of pipe and vessel inspections and are taking steps to address this at the site,’ the company states. Overall, DuPont says it is disappointed with OSHA’s classification, and will be working with the agency to understand its decision.

Among the things that OSHA’s review identified are multiple deficiencies in the La Porte site’s herbicide unit, such as failure to implement written operating procedures and to document things like atmospheric discharge piping from pressure relief devices. Now, DuPont says it has shut down the herbicide unit in order to take corrective measures. It will not be restarted until that work is complete.