US to restart chemical weapon neutralisation 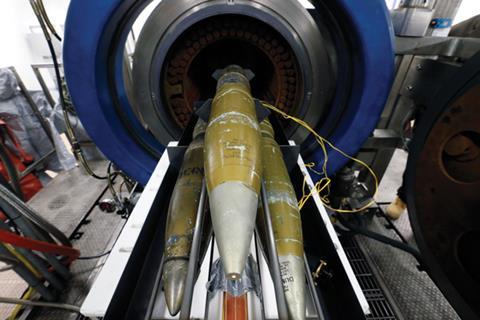 The US has approximately 3100 tonnes of chemical agents left to destroy. This is just over 10% of the volume initially declared to the Organisation for the Prohibition of Chemical Weapons (OPCW) – the body responsible for coordinating the destruction of chemical weapons globally – in the late 1990s.

Chemical agents were originally held in nine different locations and destruction at seven sites is now complete. ‘The US Army destroyed 89.75% of the declared US chemical weapons stockpile by 2012,’ explains Katherine DeWeese, chief of public affairs at the Assembled Chemical Weapons Alternatives, the US body overseeing the destruction. ‘There has been no stockpile destruction since that time.’

The two sites still holding chemical agents are in Pueblo, Colorado and Blue Grass, Kentucky. At both these sites the agents are weaponised – meaning they are inside munitions. ‘The American weapons are so complicated and never built to be dismantled,’ explains Paul Walker, an expert on chemical weapons at the non-government organisation Green Cross International. They are also ageing, delicate and some pose a risk of self-detonation, he adds. Planning their destruction has been a technically challenging process.

The Pueblo site holds 2600 tonnes of the blister agent sulfur mustard contained within 780,000 munitions – a combination of artillery shells, projectiles and mortars. Two different destruction set-ups are being used at this site. An automated system will destroy the majority of the weapons. The munitions will be cut up – using robotics – to remove any fuses and explosives. The agent will then be drained into neutralisation tanks to undergo chemical hydrolysis with hot water and sodium hydroxide. The resulting neutral solution will then be treated with microbes: breaking down the neutralisation by-product thiodiglycol to carbon dioxide, water and salts.

Not all the weapons are suitable for automated destruction. The site holds 560 munitions that have been placed inside air-tight sealed canisters previously – due to rusting, leaks or after drilling for sampling purposes – and are now difficult to access. Destruction of these munitions will start in mid-March, using two portable explosive destruction systems that have previously been used on old abandoned weapons dug up at various sites around the US. ‘The system’s main component, a sealed, stainless steel vessel, contains all the blast, vapour, liquid and fragments from the process,’ explains DeWeese. An explosive charge will be used to blow apart the munitions inside the sealed vessel, before hot water and sodium hydroxide are added. The vessel will then be rotated until the neutralisation is complete, then emptied, cleaned and reloaded.

This is a labour and time intensive process. DeWeese expects all the munitions in sealed canisters currently in storage to be processed before the main plant starts operations in late 2015 or early 2016. The explosive destruction systems will then run alongside the main plant, destroying any munitions subsequently found to be unsuitable for automated destruction. It is estimated that approximately 700 additional munitions will need to be destroyed using this explosive system. Operations at Pueblo are scheduled to be completed by 2019.

‘We are very satisfied with the technical-level preparations for destruction at the Pueblo facility, especially given the degree of complexity involved in destroying weaponised agent,’ says Peter Sawczak, a spokesman for the OPCW. ‘We welcome the facility becoming operational.’

The Blue Grass site in Kentucky only holds 523 tonnes of chemical agent in just over 101,000 munitions, but is an even bigger challenge than Pueblo. It holds a combination of sulfur mustard and the nerve agents VX and sarin. It also holds extremely hazardous M55 rockets. Blue Grass will host a similar pair of destruction set-ups and the site is just over 90% built. Destruction here is scheduled to start in 2019 and finish in 2023.