Scientists in South Korea have shown how to transform a chemical warfare agent simulant into a common drug.

Chemical warfare agents are toxic by design, their aim to injure, disable and kill. Despite international conventions that greatly limit their proliferation, hefty stockpiles pose risks of deliberate or accidental release, and disposal is not a straightforward matter.

‘The methods commonly practiced for the neutralisation of organophosphonate agents are incineration and alkaline hydrolysis,’ says Se-Jun Yim, a researcher at Pohang University of Science and Technology, who points out secondary contamination issues such as air pollution and the landfill of hazardous waste. Although alternative methods can cleanly capture and neutralise these agents, the batch processes involved are impractical and inefficient, feasible for dealing only with milligram quantities.

Now Yim and his colleagues have developed a new device to break down a toxic nerve agent simulant – dimethyl 4-nitrophenylphosphate, commonly called paraoxon – quickly and efficiently. And instead of waste pollutants, the device has a useable output, namely the active pharmaceutical ingredient paracetamol.

‘Allowing us to recycle the generated waste during the process is the main goal of this work – to convert waste to a value-added product,’ says Yim. 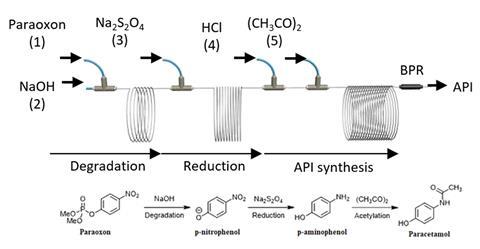 The Teflon microreactor operates according to a flow process rather than a batch process, allowing paraoxon to be seamlessly fed through the system. Reagents are added while the reaction undergoes three stages: degradation of paraoxon to p-nitrophenol, reduction to p-aminophenol, and finally the synthesis of paracetamol through acetylation. The reactor is portable, being the size of a suitcase, and can neutralise 700 grams of paraoxon a day.

‘It’s a very efficient process, with the highest space–time yield,’ remarks Julien Legros, whose group at the University of Rouen Normandy, France, also develops flow reactors to neutralise chemical warfare agents. But he notes that paracetamol as an end product is very specific to paraoxon as a starting ingredient, and paraoxon in turn is of limited relevance to chemical warfare. ‘Although paraoxon can be used as a chemical warfare nerve agent simulant, in practice its main use is as a pesticide and it is not intended for military-grade weapons,’ he says.

Yim, who used paraoxon in the study due to its relative safety and availability for laboratory use, agrees that it remains a challenge to produce value-added products from more potent chemical warfare agents. ‘Soman, sarin and tabun generate fluoride and cyanide ions upon hydrolysis, and are not suitable for making active pharmaceutical ingredients,’ he says.

Legros adds, ‘It’s still nice that you can make something peaceful and synthesise an active pharmaceutical ingredient from a toxic pesticide.’