CFC replacements may have helped repair the hole in the ozone layer, but could contribute significantly to climate change

International measures fighting ozone depletion are working, according to the latest scientific assessment, but could elevate the climate change threat without continued effort. Atmospheric levels of nearly all ozone depleting substances (ODSs) originally controlled by the Montreal Protocol - the international agreement adopted in 1987 to battle the ozone hole - are declining. But the Montreal Protocol’s Scientific Assessment Panel (SAP) emphasises that substitutes for ODSs, such as hydrochlorofluorocarbons (HCFCs) and hydrofluorocarbons (HFCs), are also greenhouse gases.

SAP co-chair and director of chemical sciences at the US National Oceanic and Atmospheric Administration (NOAA) A.R. Ravishankara told Chemistry World that so far the Montreal Protocol has dramatically cut greenhouse gas emissions. Its ODS controls have made an impact around five times that of the Kyoto Protocol’s first commitment period target, the SAP underlines. ’On the other hand, if HFC emissions continue to grow for the next 40 years, then they would indeed contribute significantly to climate change,’ says Ravishankara. 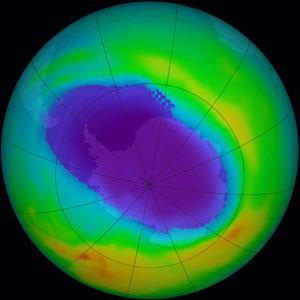 Phasing out ODSs has helped the ozone layer, but could alternatives affect the climate?

This gloomy scenario becomes possible as demand for HCFCs and HFCs increases, with HFC emissions’ climate impact currently growing by about 8 per cent per year and set to accelerate. Developing countries are mainly behind these increases, notes Ravishankara: ’The additional driver is the industrialisation of countries such as India and China, where air conditioning and refrigeration are becoming more common.’

Ravishankara is optimistic that humans can offset the impact that this demand has by continuing to find yet more benign replacements for HCFCs and HFCs. ’The world has shown that we can indeed successfully transition from CFCs,’ he says. ’Based on that, you can argue that we could again transition to even less harmful chemicals.’

Arlin Krueger, a member of the Nasa Total Ozone Mapping Spectrometer team that originally confirmed the ozone hole’s existence, has no doubt that the measures to stop ozone depletion have been successful. He warns, however, that it will be harder to motivate people to take action on climate change than it was on ozone. ’The CFC replacement greenhouse gas challenge is clearly far more difficult because of the lack of a clear result that the public can understand, like images of the ozone hole formation each October,’ Krueger says. ’Nothing has changed since 1985, when greenhouse warming was a theoretical possibility but the ozone hole was real.’