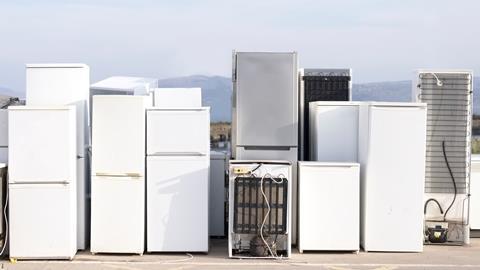 UK urged to crack down on F-gas emissions

Global phase-out of HFCs could reduce global warming by 0.5°C over the next century

A House of Commons committee has called on the UK government to slash emissions of fluorinated gases (F-gases) to help tackle climate change.

F-gases include hydrofluorocarbons (HFCs) that are used as refrigerants and in aerosols, foams and fire extinguishers. They were introduced in the 1990s to replace ozone-depleting chlorofluorocarbons, but are themselves potent greenhouse gases that persist in the atmosphere and contribute to global warming.

The House of Commons environmental audit committee says that the UK could do more to cut emissions, and that if all countries meet F-gas reduction targets it could reduce global temperature increases over the next century by 0.5°C.

In its report, the committee points out that for some F-gas applications less damaging alternatives already exist, but says not enough is being done to make use of them in the UK. One example is the use of HFCs in ‘metered dose’ asthma inhalers, which account for 70% of those prescribed by the NHS. The report says the government should aim to increase the use of HFC-free dry powder inhalers and establish an inhaler recycling system to avoid the release of HFCs in landfill. It also calls for existing F-gas regulations to be better enforced within the refrigerant industry.

‘At present, the government is failing to enforce the regulations surrounding F-gas emissions, particularly on car air conditioning units, while the NHS remains reliant on F-gas fuelled inhalers despite less damaging alternatives being available and widely used in other European countries,’ said Mary Creagh, a Labour MP who chairs the committee. ‘The government, the NHS, manufacturers and medical companies should be doing much more to address F-gas emissions. International cooperation on removing F-gas emissions could have hugely beneficial consequences for future generations.’