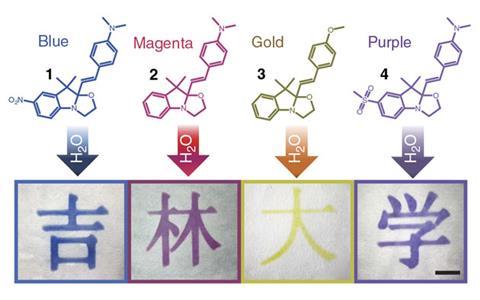 Many people are keen to reduce their paper waste, but storing and sharing data electronically is not always feasible. Rewritable paper would be one answer to this problem. Now, Chinese scientists have come up with ‘waterjet printing’ that uses paper coated with dyes that change colour when wet and return to their colourless state when dry.

To create rewritable paper the researchers screened various organic compounds and picked four oxazolidines. The lower-energy closed ring isomers of these oxazolidines are colourless in the absence of water. But when the paper is wetted hydrogen bonding stabilises the more polar open ring form of the molecules, changing the dyes’ absorption of visible light. The exact wavelengths absorbed vary with the organic compound used, allowing the researchers to print in a variety of colours.

The rewriteable paper was made by first coating ordinary paper with a layer of polyethylene glycol (PEG) to prevent it reacting with the dye, before a second layer of PEG containing the chosen dye was laid on top. Finally, another layer of PEG was added to prevent the dye absorbing water from the air or, conversely, losing water too quickly.

The team used a commercial inkjet printer and a cartridge filled with water to print out their own Nature Communications paper on the dyes. The printed page is dry to the touch and the print can be rapidly ‘erased’ by heating it to 70°C. Under ambient conditions the print remained legible for around 22 hours before evaporation wiped the page clean. Paper prepared in this way can be printed on and then erased more than 50 times.

The researchers are now working to extend the print’s lifetime, but principal investigator Sean Xiao-An Zhang of Jilin University says swift fading would have advantages for daily newspapers, for example. ‘After people had finished, they could put the paper back and the colour would disappear,’ he says. ‘Every morning you’d have a fresh issue.’ He suggests different papers could be manufactured on which printouts would last for different lengths of time. The team is also currently working towards multi-colour printouts. Zhang declines to give details but says ‘we have confidence that eventually we will deliver them’.

Organic photochemist Francisco Raymo of the University of Miami, US, who helped develop the dye molecules but was not involved in the latest research, says he was ‘very pleased to see that our molecules are being put to good use’. However, he suspects the idea’s commercial prospects may be hampered by the need to specially prepare the paper with a multi-layer coating.