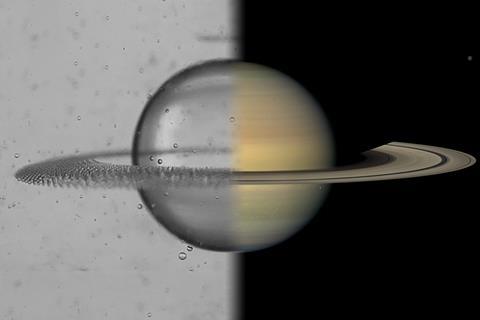 US scientists have discovered a new way to controllably produce tiny liquid droplets ‘on zap’, which is a potential alternative to existing microfluidic methods. New York University’s Quentin Brosseau and Petia Vlahovska at Northwestern University have found that electric fields can make large droplets first produce flat rims around their middle, then rings. ‘I find the shedding of rings from the rim most fascinating,’ Vlahovska tells Chemistry World. ‘It is very counterintuitive!’

The rings quickly separate into thousands of regularly-sized microdroplets. Vlahovska and Brosseau think that this could be used for ‘electroemulsification’ processes in cosmetics, drugs and food manufacturing.

Scientists regularly electrically control droplet formation in electrospray ionisation for mass spectrometry, which won the chemistry Nobel prize in 2002. There, a field makes a drop form conical tips that emit jets of tiny droplets, which also happens in thunderclouds. As the electric field pushes liquid at the drop’s surface around the cone the liquid slows down, stops at the tip and is ejected.

Brosseau and Vlahovska realised that the flow around a spherical drop made of one liquid suspended in another might also slow down and jet at its ‘equator’. The effect depends on liquids’ electrical properties, which control whether the field drives flows towards or away from the equator, and their viscosities.

The researchers consequently took a tank with electrodes on either side, filled it with castor oil, injected an immiscible silicone droplet, and zapped it. In different experiments, they could vary the oils’ viscosities, and add electrolytes to the castor oil to make it more conductive.

This is ‘an excellent experimental work which poses questions on the physics behind the phenomena’, says José Lopez-Herrera from the University of Seville, Spain. He finds the change between equatorial streaming and dimpling ‘extremely intriguing’. ‘The authors show a phenomenon that is, as yet, lacking a satisfactory explanation,’ Lopez-Herrera adds.