Will the sky fall as Dr says no to strong ‘bond’ 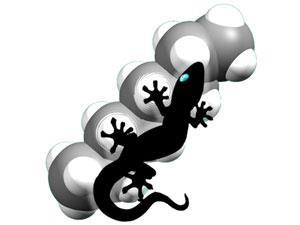 Just how strong are non-covalent interactions that control supramolecular complexes and protein structure? Perhaps not as strong as chemists previously thought, according to UK chemists. Scott Cockroft and colleagues at the University of Edinburgh have measured van der Waals dispersions forces and found them to be an order of magnitude smaller in solution than in the gas phase.

Van der Waals forces are considered critical to protein folding, the structure of carbon nanotubes and even to the ‘stickiness’ of the gravity-defying feet of the gecko. Molecular recognition and self-assembly involve non-covalent interactions. Van der Waals forces ought to predominate in the interactions of hydrocarbon chains because such molecules do not have significant hydrogen bonding interactions, which could allow researchers to study van der Waals in detail.

‘No-one had previously found a way of working around the complications arising from solvent effects whilst also looking at truly apolar systems where it is possible to unambiguously attribute free energy changes to apolar–apolar interactions,’ explains Cockroft.

The team has now used a synthetic molecular balance to measure the strength of van der Waals interactions between apolar alkyl chains in more than 30 distinct organic, fluorous and aqueous solvent environments. The balance measurements show that the interaction between alkyl chains is an order of magnitude smaller than estimates of dispersion forces derived from measurements of vaporisation enthalpies and dispersion-corrected calculations. Moreover, the team found that van der Waals interactions between the alkyl chains were strongly attenuated by competitive dispersion interactions with the surrounding solvent molecules. It seems that cohesive solvent–solvent interactions, such as the hydrophobic effect, are the dominant forces driving the association of apolar alkyl chains in solution.

‘If our findings prove generally applicable to all solvent accessible systems, then this means that applying computational methods that take van der Waals dispersion forces into account could result in large discrepancies between experiment and theory, with the added disadvantage that these types of calculations require a lot more computational time than the more established approaches,’ Cockroft tells Chemistry World. ‘If solvent competition can be relied upon to cancel out dispersion forces, then this might make modelling chemical processes easier because we can fall back on long-established, but less computationally intensive, approaches,’ he adds.

‘The role of dispersion forces in condensed phases is one of most important and interesting problems in computational materials science at the moment and experiments such as the ones reported provide valuable data against which we can test and prove new theoretical methods,’ says Angelos Michaelides of University College London and the London Centre for Nanotechnology.