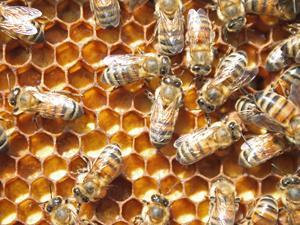 It may be the lack of chemicals in pollen and honey, rather than something in royal jelly, that makes a larvae grow into a queen

The role of the phytochemical p-coumaric acid in determining whether female honey bee larvae develop into queens or workers has been discovered unexpectedly by researchers in the US. The research demonstrates how bee larvae destined to become workers are effectively chemically castrated in their early lives1 and could provide insights into the structure of honey bee colonies and their evolution.

Colonies of the honey bee Apis mellifera have a highly organised, well defined structure in which there is normally only one fertile queen, which can lay up to 2,000 eggs per day. Unfertilized eggs grow to become male drones – bees whose sole function is to fertilise queens from other hives – while females can either develop into queens or workers, sterile bees who perform the necessary functions to maintain the hive. Workers feed larvae destined to become queens exclusively royal jelly, which they secrete from glands in their heads, throughout their development and beyond. But they only feed larvae destined to become worker bees pure royal jelly for the first three days, after which they mix in honey and beebread – a type of processed pollen.

Previous research has shown that the larvae’s diet controls their phenotypic characteristics by methylating their DNA to alter the expression of different genes. But most work has focussed on identifying the components of royal jelly that induce larvae to develop into queens.

May Berenbaum and colleagues at the University of Illinois at Urbana-Champaign have taken a different approach, looking instead at the chemicals in beebread. In 2013, the group showed that a component of beebread called p-coumaric acid, formed from the breakdown of the outer coating of pollen, upregulated several genes required for detoxification and immunity,2 which are important for worker bees. In the new research, they looked at young larvae to find out whether they could detect the same upregulation of genes controlling immunity.

What queens don’t get

They removed freshly-laid eggs from hives at the university and fed them on a semi-synthetic royal jelly mixture to which various amounts of p-coumaric acid had been added.  After five days, they removed the larvae, ground them up and sequenced the messenger RNA, to find out which genes were being transcribed into proteins. They did find upregulation of genes controlling the immune system, but that was not all: 'Much to our surprise and delight,' says Berenbaum, 'We saw a whole suite of genes that had been turned on that you don't see in adults'.  These genes control developmental pathways.

To investigate further, the researchers reared two groups of newly-hatched larvae all the way to adulthood: one on a royal jelly diet, the other on the same diet with added p-coumaric acid. When the researchers dissected them, they found the bees that had been given p-coumaric acid had significantly less well-developed ovaries. This shows, says Berenbaum, that formation of a queen involves 'not just what the queens get in their diet but also what they don't get. That's a detail that seems to have escaped notice for a very long time’. She stresses, however, that the researchers have not proved that p-coumaric acid is 'a magic chemical'. 'There's a tremendous diversity of phytochemicals in honey: we would like to look at other phytochemicals to see whether they have similar or complementary effects.'

Ryszard Maleszka from the University of Canberra in Australia, who has also studied the effects of diet on bee development says that, while it is well known that chemicals in food control gene expression, pointing to the obesity epidemic in humans, 'this is a very important, very significant study', showing 'how an organism, instead of spending millions of years evolving new genes and proteins, takes an environmental ingredient and recruits it to control them for its benefit’.