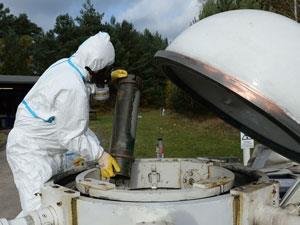 The UN watchdog has confirmed that Syria has destroyed its chemical weapons manufacturing equipment a day ahead of the deadline. Now Syria and the world faces the potentially costly and complex task of disposing of the legacy of the country’s chemical weapons programme.

The joint mission by the Organisation for the Prohibition of Chemical Weapons (OPCW) – which has just won the 2013 Nobel peace prize for its work in Syria – and the UN confirmed on 31 October that Syria had destroyed all critical equipment at its declared production facilities and mixing and filling plants. Inspectors visited 21 of the 23 plants – the other two sites were deemed too dangerous to visit; their contents have been moved to safer sites for inspection.

The next milestone will be 15 November, by which time the UN Executive Council must approve Syria’s detailed plan for eliminating its chemical weapons. According to a report prepared for the US Congress in September, Syria not only possesses stockpiles of sarin but also the nerve agent VX and mustard gas. The two main options for destroying these weapons will be incineration or hydrolysis, also known as neutralisation.

The first round of destruction used crude methods to render equipment inoperable. According to OPCW spokesperson Michael Luhan, this involved ‘smashing things, cutting things, in some cases using cement’. The aim, he said at a press conference, was for an operation that was ‘low tech and quick and cheap’.

All that we can be sure of is that there will be another big surprise that nobody anticipated. That’s the story of Syria

Christopher Bidwell a senior fellow at the Federation of American Scientists, says that the joint UN–OPCW mission was to ‘destroy production facilities and round-up any precursors’. Syria is estimated to have 1000 tonnes of potential chemical weapons precursors, with actual mixed chemical munitions pegged at 290 tonnes. ‘Destroying just the “declared” facilities involved taking saws, blow torches and sledge hammers to equipment and any non-self-propelled or unfilled munitions,’ he says. ‘As to precursors, such as isopropyl alcohol, it may be possible to destroy them in place but I haven’t come across anything showing that that has been done.’

Chemical weapons precursors tend to have legitimate commercial applications, so are available in large volumes. For instance, nerve agents are made from phosphorus compounds that can also be used to make pesticides. This makes it difficult to distinguish between a facility making chemical weapons and a legitimate chemicals complex. However, synthesis of nerve agents does require some chemistry that sets them apart from organophosphorus pesticide production. In the case of VX this would be alkylation, while sarin needs to be fluorinated, as well as alkylated. An added problem for those seeking to control chemical weapons proliferation is that precursor chemicals can often be substituted for one another. So despite thionyl chloride being subject to export controls as a chlorinating agent for nerve agents, other chlorinating agents such as sulfuryl chloride are not subject to these controls.

Chemical weapons expert Charles Blair, at George Mason University, US, tells Chemistry World that the weapon precursors would be taken out of Syria for disposal. Albania is currently the most likely destination, with Russia and Norway also shortlisted.

Blair says it is highly doubtful that Syria has the capacity to destroy the precursors itself. He mentions the US’s new portable Field Deployable Hydrolysis System, which could be brought in to deal with weapons on site. But Blair’s opinion is that Syria would never take that route. ‘They’ve had no contact with the OPCW for all those years, so they’ve had no understanding in terms of that technology.’

‘Throughput would be limited,’ Bidwell says of the portable units. ‘Furthermore, if the mixed chemicals are in self-propelled munitions you don’t want to burn them in the chamber as the solid rocket fuel may cause a problem.’ One further reason for shipping the precursors out of the country is that it gives outside observers the opportunity to take stock of the chemicals as they leave.

According to his briefings with Russian and US officials, Blair says that of Syria’s declared 1000 tonnes of chemical weapons material, ‘around 400 tonnes was blistering agent. And the rest was almost all precursors for nerve agents. There was very little from the briefing I had that was actually weaponised.’

Although small, the cache of weaponised material in Syria is a major concern, Blair says. The Assad regime and the opposing Free Syrian Army have pledged not to use these weapons, but there have been no such assurances from other opposition forces. The weapons are stored ‘under the secure hand of the Assad regime’, says Blair, but due to other factions in the conflict it is impossible to give assurances that the weapons pose no risk. Movement of the chemical weapons and precursors is taking place now, carried out by Syrian forces monitored by observers.

Blair says that the weapons and precursors could all be destroyed within a year. But he adds the caveat that it only takes one setback to jeopardise the process. ‘I think all that we can be sure of is that there will be another big surprise that nobody anticipated. That’s the story of Syria,’ he says.