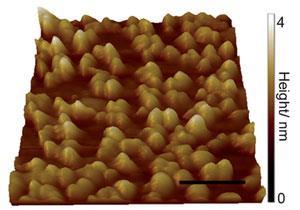 Researchers in Singapore have developed the first bench-top chemical anvil by trapping liquids inside nanoscale graphene bubbles fused with a diamond substrate. The team were able to use these graphene bubbles as high pressure chemical reactors to perform reactions that are normally forbidden, such as fullerene polymerisation.1

Anvil cells generate extremes of pressure by applying a force over as small an area as possible. As one of the thinnest elastic membranes in existence, graphene can be strain-engineered to form nanometre bubbles; spaces small enough to reach extremes of pressure when heated.2 Thanks to the bubbles’ impermeability to almost any fluid, this implies that graphene could be used to seal and pressurise fluids in nano-sized liquid cells.

Key to the formation of the bubbles was developing a way to bond the graphene to a diamond substrate. Up until now, differences in their carbon–carbon bonding has meant that diamond and graphene research has traditionally fallen into two separate camps as both were considered inert. ‘Nobody thought of marrying graphene and diamond,’ explains team leader Kian Ping Loh at the National University of Singapore. ‘We discovered a way to bond the two materials together by heating the diamond to its reconstruction temperature where its surface hydrogen is desorbed.’

The bubbles are the result of the differences in lattice structure that cause the graphene to buckle when bonding to diamond and form domes 20–30nm wide. Moreover, the researchers found they could seal water and a wide range of organic solvents in the bubbles when melding the graphene film with the diamond substrate.

Importantly, the optical transparency of both graphene and diamond also means that the chemical reactions within the bubbles can be probed spectroscopically. Loh and his team made use of this to measure the pressure inside the bubbles by trapping pressure-sensitive polyphenyl molecules in them. By monitoring the conformational changes of the molecules, the pressure within the nanobubble could be calibrated as a function of temperature. 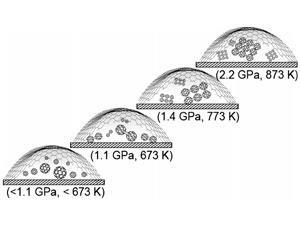 ‘A pressure of 1GPa can be reached by heating to 600°C,’ Loh says. ‘This opens up a lot of opportunities to observe high pressure chemistry, a difficult-to-access regime.’ One such high-pressure reaction is the polymerisation of fullerene or C60 molecules. Normally a symmetry-forbidden reaction due to the mismatch of molecular orbitals, the high pressure in a nanobubble was able to push fullerene molecules to form short polymers.

As well as forming simple, transparent anvils, Cinzia Casiraghi at the University of Manchester, UK, agrees that the bubbles could also be used to make adaptive-focus lenses.3 These types of lens can be created by forcing changes in the curvature of the bubble when the fluid trapped within expands. What is more, Casiraghi believes that this work could further benefit from looking at alternative low-cost equipment and substrates. ‘The formation of the nanobubbles on diamond requires ultrahigh vacuum chamber and annealing at 1275K. Furthermore, it is based on the specific bonding between diamond and graphene,’ she explains. ‘It would be good to find alternative ways to control the formations of nanobubbles, maybe on low-cost substrates, such as diamond-like carbons films’.

For the present, however, Loh is keen to explore other uses for the nanobubbles. ‘We hope to trap biomolecules like DNA inside and understand its dynamics inside a cavity.’