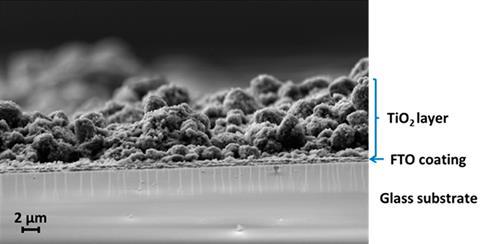 An electrode with a conductive coating that can ‘filter’ electrons based on their spins has been shown to significantly improve the efficiency of splitting water to produce hydrogen.1

Scientists have spent decades trying to master the challenge of producing hydrogen by splitting water via photoelectrolysis. However, studies often come across two major problems: the process needs high voltages and produces reactive byproducts such as hydrogen peroxide.

Recent work suggests the key to solving these issues might be to control the spin of electrons being transferred to the cell’s anode. A team from the Weizmann Institute of Science in Israel and University of Modena and Reggio Emilia in Italy, found that coating the anode in chiral molecules can filter electrons according to spin. Thanks to the ability of spin selection to control the chemical pathway, the resulting cell has a lower threshold voltage while also eliminating hydrogen peroxide formation.

Earlier this year the group published work with Eindhoven University of Technology in the Netherlands, in which they created an anode coated with chiral organic semiconductors.2 ‘However, there is a problem,’ says Ron Naaman, who led the research at the Weizmann Institute of Science. ‘The [chiral] molecules are not good conductors so we’re left with the challenge of trying to increase the current.’ In an effort to resolve this Naaman and his colleagues turned to conductive polymers.

The researchers produced a photoanode coated with a chiral poly(fluorene-co-thiophene). They found that the chiral polymer increased the current density of the anode by a factor of 10 compared to an anode coated with achiral molecules. They then went a step further, coating the anode in a composite of the chiral polymer and cadmium selenide quantum dots. As the quantum dots are good light absorbers they were able to increase the current even more, by a factor of 20 in total.

‘It’s a photoelectrochemical process so now we gain from all directions – a low overpotential, we don’t have hydrogen peroxide and we have higher current,’ says Naaman.

Jin Zhang, an expert in optical and electronic nanomaterials at the University of California, Santa Cruz, US, says the group’s observations are interesting and important. ‘Any way to increase the efficiency of hydrogen generation from water splitting is a pretty big deal.’ However, he would like to see more fundamental work on the mechanism behind the effect. ‘It’s somewhat surprising that spin selection has such a substantial effect on hydrogen generation efficiency.’

The team are now working on creating the chiral layer from inorganic molecules. The researchers hope that this will enable them to produce anodes that are more stable and cheaper, while still retaining the benefits of those they have already created.