Why did scientists endure, while sciencers perished? Philip Ball examines the quirks of science’s lexical legacy

There is, wrote an anonymous author in the Quarterly Review in March 1834, a ‘want of any name by which we can designate the students of the knowledge of the material world collectively’.1 ‘Philosophers’ was thought ‘too wide and too lofty a term’ for these gentlemen, the author explained, and ‘savans’ was, needless to say, too French. ‘Some ingenious gentleman’, however, had proposed making an analogy with ‘artist’: why not call them ‘scientists’? 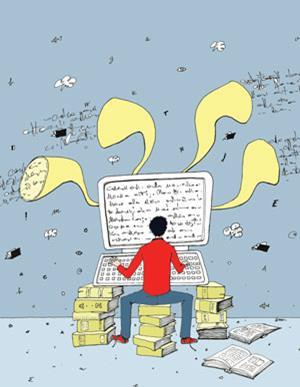 That ingenious gentleman was in fact the article’s author, the English polymath William Whewell. This is the first known reference to Whewell’s neologism, and it stuck. The irony is that Whewell’s article was a review of a book by a scientist (as we would now happily say) who was not a gentleman at all, but a gentlewoman, Mary Somerville.

‘Chemist’ was already well established by then, but Whewell went on to propose ‘physicist’ for ‘a cultivator of physics’. His friend Michael Faraday was polite about scientist, but not at all keen on the three ‘i’ sounds in ‘physicist’: it was so awkward a word that ‘I think I shall never be able to use it,’ Faraday wrote. Actually he didn’t embrace ‘scientist’ either, persisting in thinking of himself as a philosopher.

Whewell was of course a master neologist, giving Faraday also ‘ion’, ‘anode’ and ‘cathode’. ‘Scientist’ was not an immediate success, however. Linguists looked askance at this Greek–Latin hybrid. John Ruskin objected to the scientism, as we’d now say, of appropriating all knowledge (scientia) to science. Others wrongly thought the word to be American, and therefore obviously vulgar. So you only just escaped from being ‘savants’, ‘materialists’ or even ‘sciencers’.2

Why do some new words and terms in science catch on while others fall by the wayside? Did some kind of natural selection favour ‘natural selection’, not to mention ‘covalent bond’, ‘nuclear fission’, ‘quark’, ‘supramolecular chemistry’, ‘nanotechnology’ and ‘synthetic biology’? It’s not hard to see why we quickly found an alternative to ‘buckminsterfullerene’, but aside from sheer ease of vocalisation what accounts for the success or failure of a neologism? Tobias Kuhn of the Swiss Federal Institute of Technology in Zurich and his coworkers Matjaž Perc and Dirk Helbing have attempted to answer the question by conducting textual analyses to map out the spreading of ‘scientific memes’ in more than 47 million publications in the Web of Science and American Physical Society journals.3

As in Richard Dawkins’ original concept of a meme,4 these terms propagate somewhat like genes, being ‘inherited’ when they leap from one paper to another. Rival terms for the same concept might compete like alleles. The analogy is not perfect, however, because it’s not clear how much these terms mutate, far less what the criteria for selection are.

In any event, citation networks defined by the genealogy of scientific memes generally show well-defined clusters corresponding to specific disciplines. ‘Fission’, for example, is unsurprisingly limited (in physics) mostly to a cluster linked to Physical Review C, which covers nuclear physics.

Kuhn and colleagues say that, as well as frequency of use, a given meme can be characterised by two other measures: the sticking factor, which measures how often a meme is carried over between papers linked by citation, and the sparking factor, which measures how often the meme appears in papers that don’t cite any others in which it appears. The significance of a meme is then quantified by the ‘meme score’: the frequency times the ratio of the sticking to the sparking factor.

The results pinpoint some memes that, being mere chemical formulae (like C60), could hardly fail to find use: they are more like indicators of ‘hot’ compounds. Other top memes (in physics) do seem to correspond to catchy but more arbitrary names for important concepts: black hole, dark energy, carbon nanotube, graphene, quantum dot.

The meme score seems to be a good metric of impact as measured by whether terms have their own Wikipedia entry. A particularly telling plot shows the rise and fall of the meme score for different memes over time. The authors call this ‘bursty’, meaning that memes come and go quite abruptly, often over short periods. This, they say, indicates that ‘the rise and fall of scientific paradigms is driven by robust principles of self-organisation’. Another way to put that is to say science is faddish, and perhaps its language at any moment owes as much to imitation and trend-following as it does to meritocracy.

It would be fun to see the same analysis conducted for chemistry, which is only glimpsed here. Which top memes would you predict? How much do they rely on the status and persistence of their progenitors? Is there a formula for coining successful ones? There’s surely a new field here. I think I shall christen it chemisemiotics, and you should feel free to cite me.