A powerful blow against misconduct

Supporting whistleblowers is vital for detecting and preventing bad behaviour 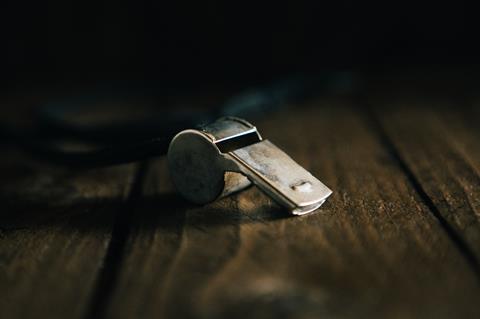 The recent news of an ex-employee’s accusation of misconduct at Syngenta brings up a painful (but sometimes painfully important) set of related topics: misconduct and whistleblowing. Now, it has to be said immediately, and in capital letters, that I am Not Licensed to Dispense Legal Advice, so don’t construe this column that way. In fact, the soundest advice that I can give someone who’s in such a situation is to consult someone who is qualified in these matters.

That’s because the laws involved are complex, and that’s a statement that applies to the UK, the US, and almost any other country where the rule of law is supposed to hold. The procedures for reporting violations of the law (and the protections for anyone bringing such accusations) can vary according to whether you’re the employee of a government agency versus working for a company, whether that company is publicly traded or not, what agreements you have signed with them, whether or not you are still an employee there, the time that has elapsed since the violations, and more.

Another big variable is what you might have done about the problem through a company’s own procedures. Every biopharma company I’ve worked at has had a hotline, generally quite well-publicised, for reporting misconduct. I have never had occasion to use any of them (fortunately), but I have definitely heard of cases where they worked as designed. That said, many people will have lingering doubts about how well such internal controls will hold for cases of major misconduct, things involving significant business or regulatory impacts or the behaviour of high-ranking company officers.

For these and other reasons, there are laws in the US that have substantial incentives and protections for whistleblowers. The False Claims Act, for example, applies to any false statements made to a government agency – which could be the Food and Drug Administration, the Internal Revenue Service, the Securities and Exchange Commission, the Environmental Protection Agency… the list goes on, and there are a lot of misdeeds that might be concealed from the gaze of one or more of them.

If substantial fines or judgments are levied against a company, the person bringing key information to the US government can be entitled to a rather generous percentage. Individual payouts of tens of millions of dollars have occurred several times, and law enforcement makes these widely known. In the UK, no such award provisions exist to the best of my knowledge, although whistleblowers themselves have protections under the Public Interest Disclosure Act for some types of disclosure and may receive compensation to cover certain losses (again, seek legal advice!). The issue of rewards has been debated in light of the US experience, but without changing the existing laws – so far.

An unhealthy workplace culture can itself drive people to lie, cheat, steal and abuse their power

None of this would be so complex (or so necessary) if there weren’t a steady supply of misdeeds to report. Sadly, there are. Until we get a bit better at automation and machine intelligence, companies will continue to be staffed with human beings, and you know what they’re like. There are some individuals who will bend the rules into decorative pretzel shapes for financial gain or personal advancement. And an unhealthy workplace culture can itself drive people to lie, cheat, steal and abuse their power, simply because they feel that they need to in order to keep their jobs. A high-ranking executive in the sales department, for example, might make it clear that everyone is going to meet the current revenue targets or be replaced with someone who will. You’ve seen it happen before. Now what?

No, in this demonstrably imperfect world we will have wrongdoing, and we will have others trying to hold wrongdoers to account. And while the latter can at times engage in abuses of their own, overall my heart is with them. Whistleblowing is a difficult thing to do – no matter what, there will be repercussions, and justice may be a long time in coming if it ever arrives at all. But it’s often the only way to reveal the worst behaviour. And the thought of such exposure has surely kept some of it from happening in the first place: what if someone walked off with all that documentation and handed it to the authorities? Food for thought, I hope.