Coronavirus vaccines are driving unusual partnerships with a range of benefits 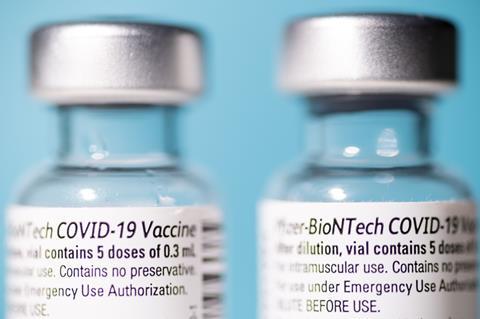 Unusual deals are being made to boost production of coronavirus vaccines

We’re seeing a lot of biopharma partnership deals in the current stage of the coronavirus research efforts. And while some of these are business as usual, some of them aren’t. Here’s a rough field guide to how these tend to work.

One standard type of deal is when a small company partners up with a larger one. That’s generally because the smaller one has some compound, technique, or platform that they own, but that they don’t have the resources to take it forward. In this business, that often means the advent of human clinical trials. Those are never cheap, but in some therapeutic areas they can be disorientingly expensive, suitable for only the largest players to take on.

Manufacturing is another area that most smaller companies will think hard about before investing in: you’re taking on a lot of fixed costs and a lot of (immediately depreciating) equipment, in many cases for a product you haven’t even properly launched yet. It can be a better use of the money to have someone else deal with all that (and the packaging, shipping and so on). Even further downstream is the sales force, and while persuading people and organisations to buy them is not really a consideration with coronavirus vaccines, it’s very much something to think about under more normal conditions.

It’s easy to imagine that the smaller companies get the worst of such agreements (‘So, you need a deal really bad? Here’s a really bad deal!’). That’s generally not the case. Most of the time both partners have something the other one needs, and terms are reached that everyone considers worthwhile. Larger companies will also do deals with each other, of course. Sometimes this is to share the risk in a huge, expensive therapeutic area such as cardiovascular disease, and sometimes it’s one company selling off an asset that no longer fits how they would like to allocate their money and time (they might, for example, have decided to get out of a whole therapeutic area entirely).

So when a BioNTech partners with a company like Pfizer on a vaccine, you can see what each of them bring to the proverbial table. But the recently announced partnership between the two of them and Sanofi, for manufacturing of that vaccine in Europe, is a bit unusual. Sanofi is of course a major player in vaccines itself, and they have been working with GlaxoSmithKline on a candidate of their own. In that case, GSK is bringing some powerful adjuvants to the deal, which Sanofi’s recombinant proteins (like anyone’s) are almost certain to need. But they’ve run into difficulties: the first look at immunogenicity in human trials showed an inadequate response, especially in older patients, adjuvant and all.

It would be pointless to get someone up to speed if they could only deliver an extra 10,000 vials

So Sanofi finds itself with some excess capacity for manufacturing and packaging, and they’re a big enough player to (first) take on the technological challenge of dealing with the unusual lipid-nanoparticle formulation of the mRNA vaccines and their low-temperature handling, and (second) to make a real difference in the number of doses delivered. It would be pointless to get someone up to speed if they could only deliver an extra 10,000 (or 100,000) vials; the time and effort spent on that would be better used somewhere else. The financial terms haven’t been disclosed, but you could look at this as a marriage of convenience, under emergency conditions. You probably wouldn’t see this under normal conditions, and you certainly wouldn’t see it done with this sort of alacrity, either.

Will we see more of this sort of thing? Don’t rule it out. The coronavirus variants that are spreading now mean that we may need some new vaccine versions to deal with them as booster shots or outright replacements. While that’s feasible, especially with the mRNA platforms and the recombinant protein ones such as Novavax, it could easily lead to a manufacturing pinch if companies have to restart production. I wouldn’t be surprised to see more of these sudden agreements if it comes to that. Let’s all hope it doesn’t, but let’s also be glad that such options are available if we need them!