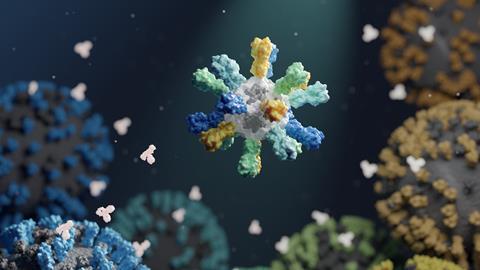 A vaccine for all seasons?

Talk about the best of times and the worst of times. This bumper year for vaccines is overshadowed only by the devastation that unfolded in their absence, and by the urgency with which their manufacture and distribution still needs to happen. I’m talking about the vaccines against Sars-CoV-2, of course (controversially overlooked in the Nobel prizes, partly on technicalities that one feels might have been waived). But now there’s also a vaccine against malaria, an affliction that currently kills around 400,000 people annually in sub-Saharan Africa. The indirect effects of the Covid-19 pandemic in disrupting prevention and treatment of malaria there might kill more people than the virus itself. So the decision to start using the RTS,S/AS01 vaccine developed by GlaxoSmithKline to protect children against malaria is deeply heartening.

But in all that excitement, another potentially transformative development in vaccines has been somewhat overlooked. One of the laissez-faire objections to efforts to control the spread of Sars-CoV-2 is that we routinely accept thousands of deaths from influenza every year, so why worry so much about a few thousand more? But Martin McKee of the London School of Health and Tropical Medicine has suggested to me that this is the wrong way round to look at it: we shouldn’t accept so many flu deaths, and indeed we try not to.

Flu vaccines already make a big difference – the US Centers for Disease Control and Prevention estimates that in a good year they reduce serious illness by 40–60% – but not as big as we might like. Partly that’s because a vaccine has to be tailored to particular flu variants – but there are lots of them, and we can’t be sure in advance which will predominate in a given flu season. The ideal solution would be a universal flu vaccine that conferred protection against them all.

That’s a tough goal.1 What information would such a vaccine provide to stimulate the immune response, when flu variants are so diverse? The two main types of human flu virus, influenzas A and B, both have viral coats studded with a glycoprotein called haemagglutinin (HA), which binds to host cells. This protein has distinct structures in different variants, as does a second key protein called neuraminidase. (These two molecules are the H and N in strain labels such as H1N1.) The immune response to vaccines is elicited largely by the exposed HA protein.

Barney Graham and colleagues at the US National Institutes of Health in Maryland, with coworkers at the University of Washington, figured that one possible solution to the problem of variety is to design a vaccine that contains the ectodomain (the part of the protein that does not include the membrane anchor) of several common HA types attached to a single particle.2 To marshal these proteins together, they concocted some clever self-assembly. They used genetic engineering to produce HA ectodomains from four existing flu vaccines (two against influenza A, two against B) that were attached to a protein scaffold computationally designed to assemble with another protein into a nanoscale structure with icosahedral symmetry. Mixing all the components together then produces the self-assembled protein core bristling with a mixture of the four HAs: 20 in all (five of each type) in a repeating pattern. Such a highly multivalent particle should send a strong signal to the immune system.

Tests on mice, ferrets and monkeys showed that these ‘mosaic’ nanoparticles could generate a good immune response to a range of respective flu viruses. What was particularly promising is that the experimental vaccine also stimulated host antibodies against the stem region of the HA proteins: the segment that joins the exposed head to the viral coat. This region shows far less variation between strains than do the head domains, and so a vaccine that elicits a ‘stem response’ might have an even wider reach than that dictated by the heads alone. Indeed, Graham’s group has previously explored wide-acting nanoparticle vaccines that use only the stem domains.3

In May, a human phase 1 clinical trial of the new candidate vaccine, called FluMos-v1, began at the NIH. This first step assesses safety, looking for adverse reactions in a small group of volunteers. There’s still a lot to do before we’ll know if it will offer across-the-board flu protection.

Still, the groundwork was done not a moment too soon, for by the time the team’s paper was submitted in May of last year, Graham – and many other researchers previously working on broad-spectrum flu vaccines, including Sarah Gilbert at Oxford – were busy with an even more urgent vaccine demand. Now that work too contemplates a similar challenge: development of a Covid vaccine that might act against all potential variants, past and future. Others, such as the California-based Vir Biotechnologies in collaboration with GlaxoSmithKline, are on the same trail. Let’s hope the vaccine bounty has more yet to offer.