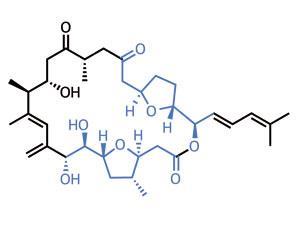 Last month’s article focused on marinomycin, a cyclic polyketal with rather obvious symmetry – and the synthetic strategy hinged on that feature. However, symmetry in natural products isn’t always so apparent and it is uncovering such ‘hidden symmetry’ that forms the core of this month’s column.

Again, we’re plunging into the marine depths to find natural products with prodigious biological activity. The amphidinolide family comprises over 30 members, varying in architecture but (almost) all featuring a complex and highly decorated macrolactone ring at the core. Amphidinolide F was first isolated in 1991, but as yet remains unconquered territory in synthetic laboratories.1,2 However, new ground has been broken by a pair of chemists from Oregon State University, US, led by Rich Carter.3 Their key insight was that hidden symmetry exists in the complex tetrahydrofuran (THF) regions. Although these two regions are not identical, the team considered that enough chemistry was in common that a mutual precursor might be used.

Eager to test their hypothesis, the team targeted the tetrahydrofuran precursor from the off, building a linear fragment based around an acetylene. The chains to either side of the acetylene are heavily oxygenated, with one set of hydroxyls installed using the ever-reliable Sharpless asymmetric dihydroxylation chemistry and the other half derived from malic acid. Treating the alkyne with a relatively strong Lewis acid prompted cyclisation of the nearer of the two unprotected hydroxyl groups onto an intermediate allene, neatly preparing the five-membered THF ring and avoiding a potential six-membered tetrahydropyran by-product (figure 1). Importantly, the team performed this chemistry repeatedly on multi-gram scale to supply their synthetic forays.

Their next task was to differentiate the common intermediate into the two subtly different portions of the target. The first job was to add a methyl group to the five-membered ring. The team hoped to do this by simply trapping the enolate of the remaining carbonyl functionality with methyl iodide (figure 2). However, they found that the intrinsic stereochemistry of the substrate favoured addition of the methyl group to the wrong face of the ring. Switching tack, the team overcame this problem by installing a C=C double bond, then harnessing that controlling stereochemistry to direct hydrogenation of the prevailing face and leave the correctly configured methyl group.

The team plugged away at elaborating the common THF cores across an array of relatively uncomplicated chemistry, taking 11 steps to get to their first cyclisation intermediate, and 15 steps to get to its partner. Then came the critical coupling of these fragments. The team decided to connect them by forming a C–C bond between a carbon destined to become a ketone in the final target and its neighbour. Carbonyl carbons are classically thought of as electrophilic or cationic in character, but the team needed an anion to react with the iodide in the other fragment.

To bring about this reversal of reaction polarity, or umpolung, the chemists made a sulfone and deprotonated it with a strong base. This anion swiftly displaced the alkyl iodide to generate the required C–C bond in good yield. Of course, the team no longer required the sulfone group, so a little base, followed by the exotic-looking Davis oxaziridine provided the desired ketone (figure 3).4

The strategy here seems to have paid off handsomely, finally completing a target that has been taunting chemists for over 20 years. Although the diversification of the common intermediate was somewhat lengthy, the effort saved in its synthesis looks worthwhile!