Faced with the term ‘polymer’, most people would consider man-made materials

Faced with the term ‘polymer’, most people would consider man-made materials, primarily plastics as typical examples. However, as in so many cases, nature was ahead of chemists, as oligomeric and polymeric materials abound in life. The typical examples are DNA and cellulose, but huge arrays of natural products are at least dimeric. Relatively recent entrants into this category are the marinomycins, products of an exciting genus of marine bacteria known as marinispora.1 This small family exhibits potent antibiotic activity, especially against the worrisome methicillin- and vancomycin-resistant strains.

From a synthetic point of view, oligo- and polymeric molecules at first glance look rather simple – after all, the repeating unit need only be synthesised once. But controlling the amount of repetition is far from trivial, especially in the case of cyclic dimers such as marinomycin A. However, a team led by Andrew Evans at University of Liverpool, UK, has a neat solution to this problem – starting with their decision of where to split the dimer.2 The team had several options. For example, ring closing metathesis provides a great opportunity for splitting across olefins. But they chose the flexibility of carbonyl chemistry and the ester groups around which to split the target. As most undergraduates learn early in their chemical tuition, carbonyl groups are extremely tunable in their reactivity, a feature that the team planned to employ in some selective dimerisation chemistry. 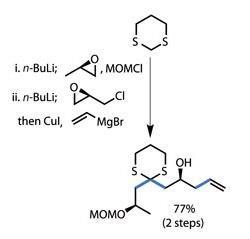 Before being able to test that hypothesis, the team had to build a suitable supply of monomer – no mean feat considering the fragile extended unsaturation and stereochemical complexity present in the two distinct zones of the monomer. The team started work with a neat surrogate for a single carbonyl group – 1,3-dithiane. The pair of sulfur atoms makes the hydrogens of the methylene group in between acidic enough to be deprotonated relatively easily. The group performed this trick twice, quenching the anion with a different enantiomerically enriched epoxide each time (figure 1).3

Freeing the carbonyl group with iodine delivered a rather complex fragment in only a few steps. The team then went one stereocentre further, reducing the freed carbonyl diastereoselectively with samarium diiodide to complete the first fragment.

The team coupled this with a second fragment, made in five steps from a d-ribose derivative, and a further unsaturated moiety finishing in a salicylic acid group to finish the monomer (figure 2).

The salicylic acid contains the key carbonyl group, around which the team planned to stitch their dimer together. Their plan was to deactivate this carbonyl group in half of their material to discourage formation of oligomeric side products. Allowing the phenolic OH to form a hydrogen bond with the carbonyl was enough to deactivate it, and conveniently stopped the molecule from decomposing when a strong base was added to deprotonate the alcohol at the other end of the monomer.

On the other hand, making an acetal between the carboxylic acid and phenolic hydroxyl eliminates that hydrogen bond and makes a much more reactive ester. By combining the two, the team completed their first ester stitch to form a dimeric intermediate, with a pleasing 82% yield. They then reactivated the other salicylic acid group by protecting the phenol to disrupt the hydrogen bond, allowing a speedy and effective intramolecular cyclisation reaction to complete the macrocycle in a reasonable 34% yield (figure 3). 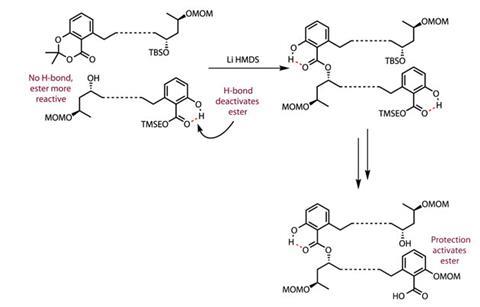 It’s clear that the team hoped for a little more than 34%, but such large and heavily protected substrates can be subject to a plethora of side reactions, not to mention the light-sensitivity from all those conjugated alkenes. More importantly, they were able to prove their tactic of selectively activating or deactivating the salicylate group is a winner.

What is even more interesting is what this may imply about the biosynthesis of such molecules, as once again it appears nature may have got to this strategy first.