Proving that atoms and molecules exist is surprisingly difficult 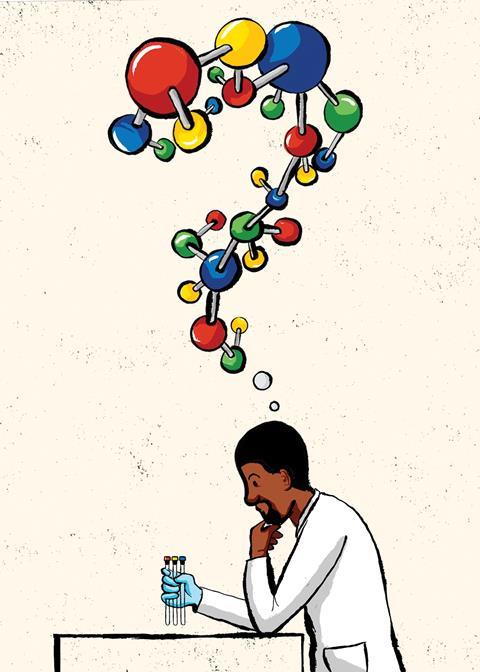 Next time you’re working out a molecular structure, pause to consider whether molecules even exist

Talking of atoms, molecules, bonds and reactions is so essential to chemistry’s practice that questioning their existence might seem a strange thing to do. However, it is an open question in philosophy whether this chemical ‘stuff’ actually exists; a question that is surprisingly difficult to answer!

The main reason for this difficulty lies in that chemical entities are – strictly speaking – unobservable. In general, the more one moves towards very small (and very large) energy, length and time scales, the more difficult it is to experimentally access the entities that purportedly exist at those scales. Observing such entities and measuring their properties requires making conjectures and inferences about the world. So, to establish the reality of chemical entities one needs to look at how chemistry is (and has been) done. Among other things, this involves evaluating how scientists justify their theories and what sort of approximations and idealisations they make, as well as the criteria with which they establish the predictive and explanatory success of their theories.1

A standard argument in favour of the existence of scientific entities is the so-called no-miracles argument. This was famously expressed by Hilary Putnam, who claimed that the success of science in predicting, explaining and manipulating phenomena would be miraculous if the things it posited didn’t exist in the world.2 How could it be that entities that so successfully explain what we observe, do not exist? The best explanation that doesn’t render chemistry’s success a miracle is that chemistry is true and that the things it posits – like atoms – are real.

However, many philosophers resist this position. One objection to it is the pessimistic induction argument.3 This states that throughout the history of science, well-established theories have been deemed false and been substituted by other ones. We do not have grounds to believe that, in the future, things will be any different: most probably, our best current theories (and the entities that they posit) will be substituted by other ones once again.

The role of quantum mechanics

Whether chemical entities exist also hinges on the role of quantum mechanics – which, as I’ve previously discussed, is a hotly debated topic.

If quantum mechanics successfully describes atoms and molecules in terms of subatomic particles and their interactions, then this may imply that there are no atoms and molecules, but only the particles that make them up.4 In so far as chemical entities and properties are fully explicable by these physical entities, there is no need to believe that chemical entities exist. In philosophical terms, this view is often referred to as eliminativism. (Of course, if the pessimistic induction argument also applies to physics, then you would reject the existence of physical entities as well – rendering this argument redundant.)

One can also invoke quantum mechanics to argue for the opposite view – that chemical entities exist. The failure of quantum mechanics to identify certain chemical properties may suggest that molecules are not merely the sum of their parts in the way – say – a puzzle is composed of all its different pieces. Instead, there is something about how atoms and molecules explain certain phenomena that cannot be accounted for by subatomic particles alone. One could say that the puzzle’s picture would never be perfectly intelligible unless one also looks at the characteristics of the whole puzzle and not just those of each of its pieces. If this is the case, then one does not have to accept eliminativism but can maintain that chemical entities exist as independent and autonomous entities.

The answer can have important implications

Given how successfully chemical theories have contributed to so many different aspects of our lives, from medicine to technology and the food industry, I find it hard to believe that they are very far off from how the world actually is. Nonetheless, it does not follow from this that chemical entities are not determined by the physical entities that make them up. Defending the reality of chemical entities in a way that is consistent with them depending on physical ones is one of the most challenging problems in philosophy of science.

The reality of chemical entities is an interesting question for its own sake. Nevertheless, how truthful we consider our scientific theories to be can affect the resources we dedicate to developing them, among other things. So the answer we give to this question can have important implications that go beyond one’s curiosity about the world.