Something truly extraordinary was announced in December 2010: an organism was described that used arsenate instead of phosphate in its DNA.1 The arsenic-loving bacterium GFAJ-1 had re-invented the genetic material. 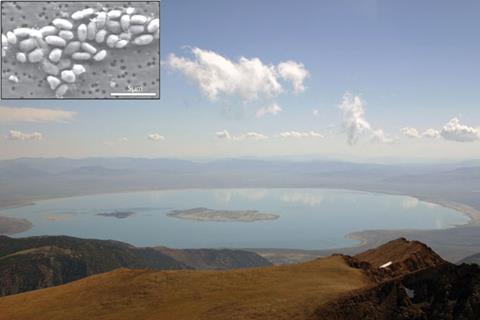 GFAJ-1 (inset) was isolated from Mono Lake in California, US

The work, led by Felisa Wolfe-Simon and published in Science, was heavily promoted by Nasa and reported widely in the press. But extraordinary claims prompt extraordinary scrutiny and along with the flurry of excitement, the work also garnered a storm of criticism – notably from chemists, biochemists and microbiologists.

For the geochemists and physicists who wrote and reviewed the paper, the idea that arsenic could substitute for phosphorus is unexceptional. It happens all the time in geology – why not DNA as well as rocks? The authors gave some evidence that something which co-purified with DNA had arsenic in it; a hypothesis had been formulated, and data generated to test it, QED.

Biologists were astounded, but cautious – they e used to life being related by descent, so how could a bacterium have so radically altered its base genetic material? It would be like discovering a giraffe growing leaves; not impossible, but far more robust evidence was needed.

For chemists, the claim was just plain wrong. They had a huge body of interconnected facts and theories about molecules that said arsenates are unstable to hydrolysis. That this DNA-like material could be isolated in aqueous solution proved it did not contain arsenate ester links.

Battle ensued, and the chemists were eventually proven right. But at the time, I (a biochemist), Steve Benner (a chemist) and Sara Seager (a physicist) wondered why these groups had such different conclusions from exactly the same data. We recently published our musings, because they point to a significant issue for interdisciplinary science.2

GFAJ-1 illustrates the problem that any trembling PhD student entering their viva will know. The scientist is an expert on their experiments, but they do not necessarily know the broader scientific context, or what standards of proof are expected of them. This situation is amplified when work bridges fields: a narrow, detailed training in one area does not give a deep understanding of the nature of evidence in another. Proof for a chemist requires different data and arguments than proof for a physicist. Neither is ‘better’: each is suited to the theory and understanding of its respective domain. The problems arise when geochemists try to make breakthroughs in biochemistry, biochemists in physics and so on. Obvious, perhaps, but in multidisciplinary research it becomes a major problem.

Of course, all new science is multidisciplinary and always has been. And a rising tide of reports suggest that the scientific community is not just struggling to identify what is good science in nascent, niche fields like astrobiology, but in mainstream subjects too. Amgen3 and Bayer4 published papers in 2012 reporting the irreproducibility of biomedical research validating drug targets. The papers were a shock to many – if 75% of important, landmark studies on cancer biology are irreproducible, it suggests more than some carelessness by a PhD student. But when I asked an executive from Genentech what he thought, he said that he’d had exactly the same experience, just not written up. The story of the rise and fall of the ‘anti-ageing’ sirtuins5 as drug targets illustrates why: researchers over-generalised from one specific experiment (no doubt carefully done) to every metazoan on the planet, which just will not do.

Recent revelations6 that some functional neuroimaging research is actually looking at noise rather than thoughts (for example, detecting complex cognition in a dead salmon) show just how far a combination of cross-discipline engineering and technical innovation combined with wishful thinking and poor statistics will take you.

These failures arise from the factors that influence research and the pressures and motivations that push and pull at scientists: the drive for ever more innovation to attract grant money; the need to use (but not to understand) the latest sexy technique to get published in high-impact journals; short-termism in funding meaning that the solid foundations cannot ever be laid before the grant runs out; the lure of venture capital or patents. They all dissuade us from phoning a friend or asking the audience to check that our answer is not spectacularly wrong in ways we do not understand (but are elementary for someone working in another specialty).

GFAJ stands for ‘Get Felisa A Job’ – the authors’ half-joking admission that high-profile career chasing is the major point of publishing. In Wolfe-Simon’s case, the intemperance of ambition simply ended up costing time and money, and may have cost her a career.

Let’s be clear: science is the most powerful way of understanding reality ever invented. Its application has given us health, wealth and leisure beyond the imagining of our ancestors, and a deeper understanding of our world and our nature than any system of knowledge before it. But there is more to science than any one person can know. Wandering unknown paths requires a native guide or we waste your time, my money and opportunities for all.

William Bains is a biotech researcher, entrepreneur and innovator based in Cambridge, UK